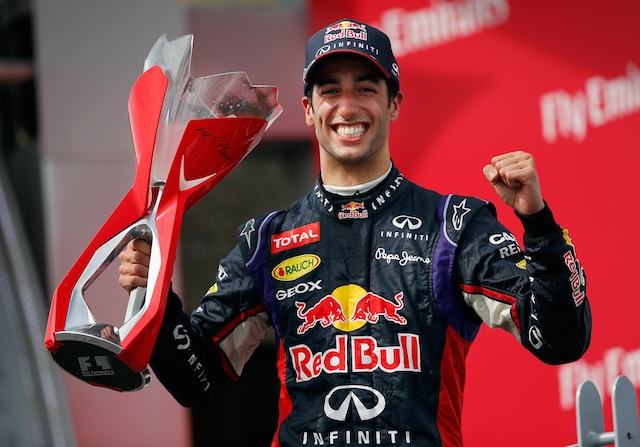 The Australian hunted down Mercedes’ Nico Rosberg in a strong final stint before passing the German with just two laps remaining.

Ricciardo made no mistakes in the final laps to bring home his first win and end Mercedes’ perfect start to the season.

Rosberg, who had been suffering from power issues, came home in second just ahead of Red Bull’s Sebastian Vettel.

The race finished under Safety Car when the Williams of Felipe Massa and Force India’s Sergio Perez made heavy contact at tuner 1 on the penultimate lap.

Lewis Hamilton retired with brake failure after challenging long time leader Rosberg for the majority of the race.

“I’m still in shock,” said Ricciardo on the podium.

“This is ridiculous. It’s so great to see so many Aussie flags.”

“In the last 20 laps we saw Lewis Hamilton have a problems and that Rosberg was slow on the straights and we had a pretty good car and we managed to get past Nico late on.

Once again it was a battle between the Mercedes team-mates at the start as Rosberg just hung onto the lead at the first turn after locking his brakes.

Hamilton was forced wide which allowed Vettel to split the pair.

The race was soon neutralised when the Marussias of Jules Bianchi and Max Chilton crashed at Turn 3. Chilton lost control of his car and speared into the side of the Frenchman sending him hard into the barrier.

Both drivers emerged unscathed and racing resumed seven laps later after a lengthy clear up.

It didn’t take long for Rosberg to open up a handy lead from Vettel while Hamilton searched for a way around the Red Bull. By lap 10 the Brit had breezed past using DRS as he set his sights on his team-mate.

The pair galloped away from the field as Vettel was left to fend off the Williams pair of Massa and Valtteri Bottas. Ricciardo held station in sixth position.

Rosberg maintained the lead from Hamilton after the first stop but the Brit soon began to home in on his team-mate.

Hamilton was all over the rear win of the German as he piled on the pressure. His momentum took its toll as Rosberg straight lined the final chicane prompting an investigation from the stewards.

Rosberg was handed a warning but escaped penalty.

Hamilton jumped Rosberg for the lead in the second round of stops but he soon fell behind after locking his brakes on the out lap.

The three-time Canadian GP winner locked his rear brakes again while trying to regain the lead before coasted into the pits and retirement with brake failure.

Rosberg also appeared to be struggling with mechanical issues of his own as his lead was slashed.

Behind Perez had moved into second with the aid of slick one stop strategy which put him in front of the Red Bulls of Ricciardo and Vettel.

On much older rubber the Force India was holding up the duo. This allowed Massa to join onto the back of the lead quartet split by just two seconds after making use of fresh tyres to pass Bottas and Nico Hulkenberg for fifth.

With Rosberg struggling for pace the final 20 laps provided a fascinating dice for the race victory involving five cars.

After being held up by Perez, Ricciardo finally moved into second position with just five laps remaining after a slick move at Turn 1. He then took off after the ailing Rosberg.

It wasn’t long before he found himself all over the back of the championship leader and with just two laps to go he used DRS to pass him for the lead on the back straight.

The battle for third, fourth and fifth raged as Vettel also passed Perez.

On the start of the penultimate lap Perez and Massa carshed at Turn 1 while fighting for position which saw the race end under the Safety Car.

As aresult of the Perez/Massa clash, McLaren’s Jenson Button came home in fourth ahead Hulkenberg and Ferrari’s Fernando Alonso.