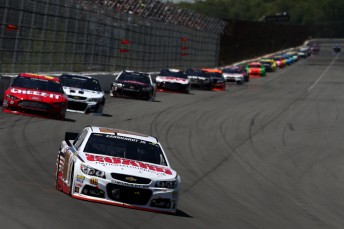 Earnhardt Jr. takes his first win at the ‘Tricky Triangle’

Keselowski had dominated the race leading a total of 95 of the 160 laps, but on the final run to the chequered flag he picked up debris on the front of his car and had engine temperature issues.

The Penske driver attempted to run up behind the car of Danica Patrick, who was being lapped, to have the paper sucked off the grille.

However, he miscued things and it allowed Earnhardt Jr. to drive by into the lead.

It was the second victory of the year for Earnhardt Jr., who opened the season with a win in the Daytona 500. It was his first win at the ‘Tricky Triangle’.

“He had me beat. I couldn’t get to him. It’s real hard to pass here. I’ve lost some in some strange ways. It feels good to win one like that.

“We had a little temperature on our car. Brad definitely had the better car. I’ll own up to that, but we won the race.”

Keselowski was left with no option than try something to remove the debris. 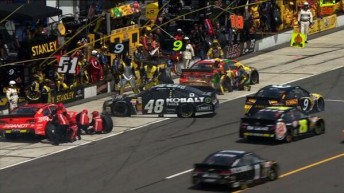 Johnson spins after contact with Ambrose on pit lane

One of the major moments occurred on the pit lane when Jimmie Johnson collided with Australia’s Marcos Ambrose.

Johnson’s team called for a two-tyre stop and as Ambrose was coming to his pit box, two stalls down from the #48, the six-time champion drove into the side of the Tasmanian’s Ford.

Johnson spun and was fortunate not to hit the pit crew of Justin Allgaier. Both cars required repairs on pit road with Johnson finishing sixth, while Ambrose ended the day back in 24th.

“We did a two-tyre stop and didn’t know who was coming into the pit stall,” said Johnson.

“I don’t know the crew on the no.51 car (Justin Allgaier), but God was looking after them today. My car somehow pivoted around the right-front tyre changer and carrier and I didn’t hit those guys. So I was scared to death that I was going to hurt someone.”

VIDEO: Johnson and Ambrose collide in the pits