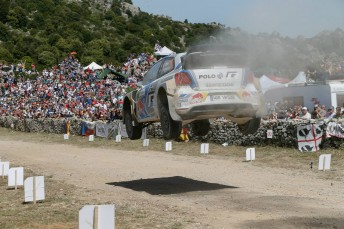 Ogier is in the box seat in Italy

The battle between Volkswagen team-mates Sebastien Ogier and Jari-Matti Latvala at Rally Italia Sardegna has seen the defending world champion come out with a sizeable lead with one day remaining.

Latvala came into the leg with a 22 second advantage after the opening day, but an overheating issue in the morning nearly saw the Finn lose time before the lunchtime service.

He switched off the anti-lag system on the car and it cooled things down enough for him to complete the first run over the 59.13km Monte Lerno stage.

Ogier won the stage but had slowed after a radio call from his team told him that Latvala was going to stop.

After taking 11s off the lead, Ogier then grabbed another five seconds in the next test before the repeat of Monte Lerno to end the day.

Ogier’s unrelenting pressure paid the ultimate dividend when Latvala made a mistake as his Polo R WRC went wide and slammed into a rock.

The Finn was forced to stop and change the wheel finishing the day 100s behind Ogier.

“It was my mistake,” said Latvala.

“The rear of the car jumped out of the ruts and we damaged the wheel on a rock. I had to stop and change it.”

With Latvala hitting trouble, Mads Ostberg inherited second place in his Citroen. The Norwegian had been battling countryman Andreas Mikkelsen for much of the day and he showed a clean pair of heels to his VW rival when Mikkelsen had to carry a broken damper into the final long stage.

Ostberg’s focus in now on keeping in front of Latvala on the final day. “For sure, we can push harder if we need to tomorrow,” he said.

Elfyn Evans ended the day in fifth place after he was gifted a place when Robert Kubica ripped the right-front wheel off his Ford Fiesta RS WRC on the final stage. Martin Prokop, who was suffering with severe back pain in the afternoon, completed the top six in his private Ford. 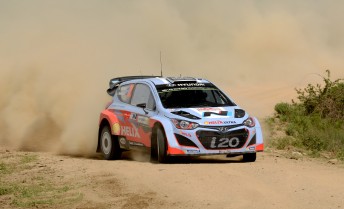 New Zealand’s Hayden Paddon had been sitting in eighth place heading into the day’s final stage.

But just 10km into the test Paddon reported a misfiring engine after going through a water splash.

He tried to continue but was requested to stop by the team mid-stage to avoid damaging the engine further.

The team is now confident of getting him back into the event under Rally 2 regulations tomorrow.

“We just concentrated on making improvements to the car and improving my own driving on these tough stages today,” said Paddon.

“We made a few changes at lunchtime service and it was a definite improvement but unfortunately we couldn’t complete the final stage due to an engine misfire after the water splash which the team has to examine.

“Hopefully, we can get back out there tomorrow and conclude our learning from this event.”