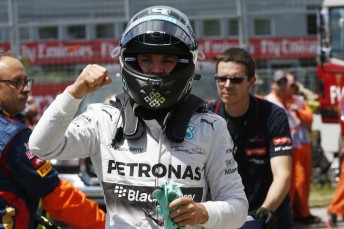 Nico Rosberg recorded back-to-back pole positions after coming through a classic duel with his team-mate Lewis Hamilton in Montreal.

The Mercedes drivers went head-t0-head once again but it was Rosberg who pipped his team-mate for the second race in succession as he scooped pole by just 69 thousandths of a second.

Hamilton had topped the timesheets at the end of free practice on Friday and looked to be favourite for pole after heading Q1 and Q2.

However, the Monaco Grand Prix winner saved his best to the final top 10 shootout by posting a 1.14.874s effort.

Williams made the most of their Mercedes power advantage to record their best team qualifying of the season as Valtteri Bottas was fourth quickest just ahead of his more experienced team-mate Felipe Massa.

It proved to be a disappointing session for Ferrari as Fernando Alonso could only muster a time good enough for seventh spot, while his opposite number Kimi Raikkonen will line up in 10th position. The Scuderia boosted by upgrades had shown signs in practice that they could challenge both Mercedes and Red Bull.

Toro Rosso’s Jean-Eric Vergne continued his impressive display at the Circuit de Gilles Villeneuve this weekend by securing eighth on the grid ahead of McLaren’s Jenson Button.

Force India’s Nico Hulkenberg narrowly missed out on the top 10 shootout by half a tenth and was forced to settle for 11th on the grid alongside rookie Kevin Magnussen.

Caterham’s Marcus Ericsson produced the only incident as he brought out the red flags at the end of Q1 when he crashed on the exit of the first chicane.