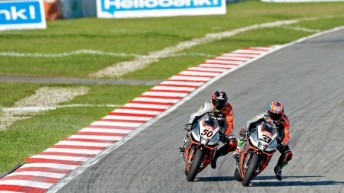 The Aprilia rider came through intense battles with his team-mate Sylvain Guintoli on the way to taking the chequered flag in both races as the championship made its maiden visit to Sepang.

After starting from fifth on the grid, the Italian found himself on the tail of polesitter Guintoli after the Kawasaki’s of reigning world champion Tom Sykes and Loris Baz tangled. The pair fell taking Crescent Suzuki’s Alex Lowes with them.

The incident left Melandri to chase Guintoli at the front and a race long dice ensued with the duo taking turns to lead the race.

In the end, Melandri finally made a move stick as he went on to secure the first world superbike race victory at the circuit from Guintoli.

Australia’s Bryan Staring picked up points on his first start in the category for IRON BRAIN Kawasaki with a 13th place finish.

Melandri and Guintoli resumed their battle in race two as the Aprilia pair quickly found themselves at the front albeit after a red flag period.

The race was brought to a halt after just three laps when Claudio Corti’s MV Agusta caught fire.

Five bikes were locked together at the front after the restart with Sykes, Elias and Baz joining the two Aprilias.

Guintoli and Melandri soon edged away from the rest of the field for a second head-to-head battle of the weekend.

The pair exchanged places several times on the final lap before Melandri managed to get the better of his team-mate to take the chequered flag for the second time.

The double victory for Melandri has moved him into fifth in the championship standings 54 points behind Sykes.

The World Superbike Championship heads to Italy’s Misano circuit for round seven on June 22.