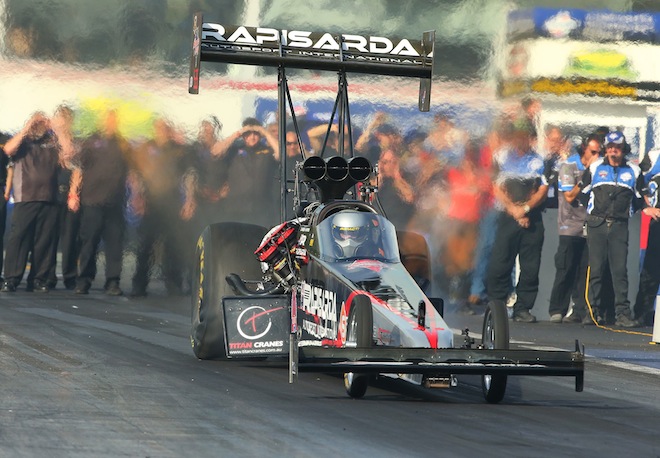 Damien Harris took the Top Fuel victory in the 2014 Winternationals at Willowbank Raceway, defeating Anthony Begley with a 4.756 second pass at 283.73mph.

It was the end of an impressive run for Top Fuel debutant Begley at the Winternationals. The Western Australian caused an upset in the quarter finals, defeating three-time champion Phil Read.

Read later complained that Begley had held him for too long on the starting line and initially expressed surprise he had not been disqualified for dislodging the timing block, which was moved by the dragster’s parachutes.

Alan Dobson’s Top Fuel championship points lead looked to be at risk after he was defeated by Steve ‘The Pom’ Read in the first round of eliminations.

However, the defeat of Phil Lamattina by Dobson’s team mate Harris allowed Dobson to hold onto his advantage.

John Zappia cemented his lead in the Top Doorslammer championship standings, defeating Daniel Gregorini with a 5.833s pass at 252.90mph.

Victor Bray did not contest his place in the Top Doorslammer quarter finals with his son Ben Bray remaining in hospital after yesterday’s accident in round three of Factory Xtreme. 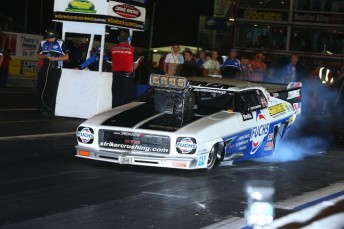 The Winternationals finished on a brighter note for the Bray family with Victor Bray’s granddaughter Madison McClennan defeating Cory Burns to win in Junior Dragster.

The Pro Stock final was a family affair with Aaron Tremayne taking on brother Tyronne Tremayne.

Tyronne handed the win to his brother with a one one-thousandth-of-a-second red light.

The Australian Pro Stock records continued to fall on the final day of racing at the Winternationals. Lee Bektash lowered the national elapsed time record for Pro Stock even further with 6.950s pass at 196.39mph on a solo pass in the quarter finals.

In the semi-finals Tyronne Tremayne reset the national speed record with a 6.976s pass at 196.85mph.