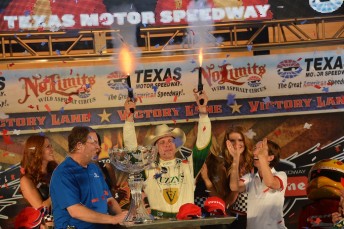 Superspeedway gun Ed Carpenter made up for his unfortunate exit from the Indy 500 by winning the Firestone 600 at Texas Motor Speedway.

Indiana native Carpenter crafted out a thrilling win by taking the lead on lap 182 of the 248 lap affair.

It was a welcome turn of good fortune after Carpenter was taken out late at the Indy 500 two weeks ago when seemingly in a position to win.

Carpenter drove the perfect race in the #20 Fuzzy’s Chevrolet to beat Team Penske pair Will Power and Juan Pablo Montoya.

“The Fuzzy’s car was hooked up by the end. I think we were for sure the car to beat at the end,” Carpenter said.

“I was a little worried about that last yellow.”

After dominating in front Power checked up in traffic, allowing Carpenter to surge to the front before the pair pitted together with 36 tours remaining.

Carpenter beat Power out but the Australian’s race was soured when he was pinged for pitlane speeding after locking up coming into pitlane.

He served his drive-through immediately with his race at the front seemingly gone.

Then a late race caution saw Penske call Power in from sixth position for fresh tyres, a gamble which paid off as the series leader rocketed to the finish for the final two green laps.

“What an awesome call by my team to get tyres. I screwed up again, that’s four drive throughs in five races. That’s not good enough,” Power said.

“I was just happy to get back to second. It was just an awesome last lap.”

Kanaan was the last runner to take the checkered flag on the lead lap in sixth.

After a blistering start, Marco Andretti was an early retirement on lap 5 after the engine caught fire in its #25 Andretti Autosport car bringing out the first of three caution periods.

The race remained green until lap 121 when Sebastien Bourdais and Justin Wilson smacked the wall at turn 4 with Wilson claiming he was squeezed on the inside apron by the Frenchman.

Power now moves to 370 points with Castroneves on 331 while Ryan Hunter-Reay, who retired on lap 136 with mechanical problems, on 310.

See below for Texas results