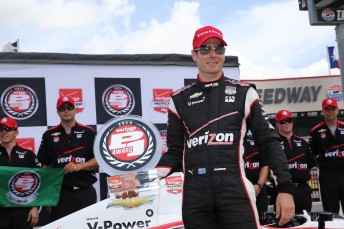 Will Power takes pole in Texas

The Penske driver recorded a two-lap average speed of 218.896mph (352.28km/h) to claim the prime starting position as IndyCar heads into a third successive weekend of combat.

“I’m very focused on the race. Last year, (teammate)  Helio (Castroneves) was very strong, so I’ll try to get a car that strong for the race if I can.”

By earning a bonus point for the effort Power has now bumped his overall lead in the series over Castroneves to 20.

Castroneves had fought chronic understeer problems in his qualifying which left him floundering in 14th.

The#67 Sarah Fisher Hartman driver Josef Newgarden sprang a surprise to be on the front row with Power after a 217.85mph (350.60km/h) run.

Newgarden was the only driver to improve his first lap speed on the second run as much of the field fought handling issues.

Ganassi driver Ryan Briscoe had complained of gearing issues and will start from 13th, one place behind Andretti Autosport driver Ryan Hunter-Reay who sits third in the points standings.

“I think we were just off on the gears for qualifying and I wasn’t able to put together the lap times we were hoping for,” Briscoe said.

“In qualifying it’s the fine details that can really make you lose quite a bit of speed and that was definitely the case for us today.”

*Stay with Speedcafe.com for all the latest IndyCar Series news