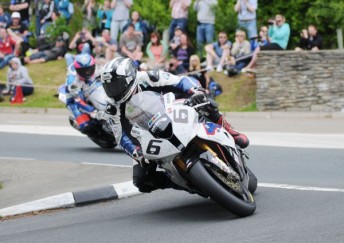 Michael Dunlop has completed the Isle of Man TT in fine style winning the Senior TT to make it 11 race wins for his career in the famous event.

He joins Steve Hislop and Phillip McCallen on 11 wins also meaning it is the second straight year he has won four races during the week; the first rider to do so.

The BMW Motorrad rider was down in seventh midway through the opening lap but steadily moved through over the six lap journey to eventually win by 14 seconds from Honda Racing’s Conor Cummins with the Tyco Suzuki of Guy Martin in third. 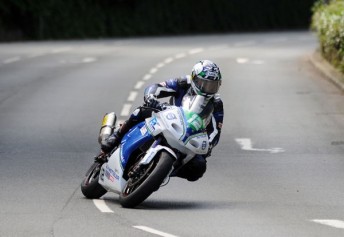 Just like twelve months ago Bruce Anstey and James Hillier battled all the way to the chequered flag, this time for fourth, and it was again the Kiwi who prevailed, this time by 1.4s. Meanwhile, John McGuinness, sixth at the end of the opening lap, duly completed the race in the same position to end a difficult week with a solid finish.

Australia’s Josh Brookes put behind the disappointment of Wednesday’s Supersport race, when he was knocked off by Lee Johnston at Creg ny Baa on the final lap, to finish in a strong seventh with Dan Kneen, Michael Rutter and David Johnson rounding out the top ten.

Fellow Australian Cameron Donald failed to finish as the all-new Norton once again had technical issues.

One of the major retirements in the race was William Dunlop who was in the fight for the lead when he crashed at the Les Graham Memorial. The 28-year reported to have received a suspected broken leg and was taken by airm to Nobles Hospital.

Earlier in the day Dean Harrison claimed his first Isle of Man TT race win with victory in the morning’s 3-lap Lightweight race. The RC Express Racing by MSS Performance rider led from start to finish to run out victor by 14.6s with last year’s winner James Hillier in second and another youngster, James Cowton, in third.