Latvala leads on a dramatic day in Italy

Latvala leads on a dramatic day in Italy 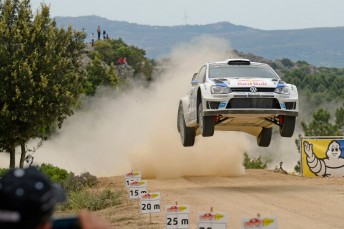 Latvala jumped to the top in Italy

Latvala finished the day 20 seconds to the good over Volkswagen team-mate Sebastien Ogier, but it was the morning loop which provided all the drama.

Hirvonen was forced to retire on the road section to the third stage when his M-Sport Ford Fiesta RS caught fire and burned to the ground. Neither Hirvonen or co-driver Jarmo Lehtinen were hurt in the incident.

“I have no idea what happened and I don’t think we are ever going to find out,” said Hirvonen.

“It was really strange. Straight after the stage [SS3] everything was OK and operating as it should. We stopped, took our HANS and helmet off, checked all the tyre pressures, had the usual look around the car and everything was fine.

“After we set off again, the car caught fire. We smelt the smoke and as I looked back the rear-right corner was covered in flames. We stopped straight away but they were already over the roof. I managed to empty three fire extinguishers but it didn’t do anything to calm the blaze. There was nothing we could do to save the car.” 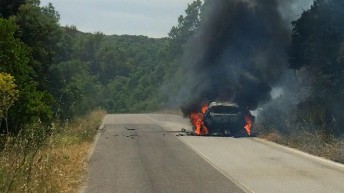 Hirvonen’s Fiesta destroyed in the fire

This left the Hyundai duo of Thierry Neuville and Juho Hanninen out front as they took advantage of superior road conditions starting down the order.

However, on the preceding stage before lunchtime service Neuville stopped with a suspension issue and lost over 20 minutes.

Then Hanninen rolled his i20 WRC before reaching the finish.

Also out was Kris Meeke who had a battery issue with his Citroen which forced him to stop on the penultimate stage of the morning.

Latavala led by just 2.2s over Mads Ostberg (Citroen) at lunchtime, but a repeat of the stages in the afternoon meant the loose gravel had been swept and the VWs began to surge.

The Finn eased away with three stage wins from the four contested, while Ogier who was first on the road, moved from sixth to second place.

“We had brake problems on the first stage this morning but it’s all gone well since then. I need to stay cool and keep the same speed tomorrow.” 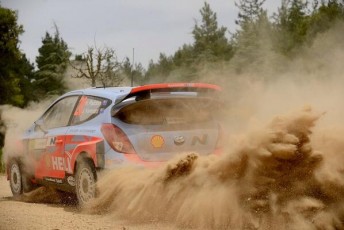 Ostberg was unable to match his morning pace during the second loop of stages and finished the day 34.7s behind in third. Andreas Mikkelsen sits just 9.6s back in another VW, while former F1 driver Robert Kubica enjoyed a trouble-free day to be fifth.

Martin Prokop had a great morning to be third, but difficulties with his handbrake saw him fall back to seventh by the end of the leg.

New Zealand’s Hayden Paddon completed the day in 11th place while still familiarising himself with the Hyundai WRC.

“A challenging day with very tricky roads which were slippery and rough,” said Paddon who also suffered a puncture.

“We got through relatively unscathed, apart from a puncture in the afternoon (SS7). I just clipped a rock on the inside corner at the start, so we drove 11kms with a front puncture, which is a testament to the performance of the tyres.

“I’m enjoying driving the car but I’m struggling to get rhythm. Nevertheless we have made it through, which is good. We will make some set-up changes for tomorrow.”