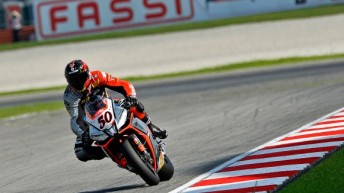 Sylvain Guintoli came through a closely fought qualifying session to secure pole position for round six of the World Superbike Championship at Malaysia’s Sepang circuit.

The Aprilia rider had dominated in free practice but he was pushed all the way in qualifying with a little over a tenth of a second covering the front row.

In the end, the Frenchman secured the all important pole by just 0.106s from reigning world champion Tom Sykes. Ducati’s Davide Giugliano completed the front row in third.

Guintoli set the pace from the start after posting the fastest time of the weekend before going on to better that with a 2.03.006s effort, which eventually proved good enough for pole.

Despite leading the session from the start, the destiny of pole was far from certain as Sykes, Giugliano and Loris Baz looked to threaten late on.

Baz appeared to be the most likely to knock Guintoli from his perch but the Frenchman fell at the final corner on a flying lap, which had been quicker than the provisional polesitter.

The Kawasaki rider would end up sixth on the grid behind Toni Elias, who pipped Marco Melandri to fourth on row two.

Irishman Eugene Laverty was seventh fastest for Crescent Suzuki ahead of Ducati’s Chaz Davies and the Suzuki of Alex Lowes.

Meanwhile, Australia’s Bryan Staring will start from 23rd on the grid for IRON BRAIN Kawasaki.