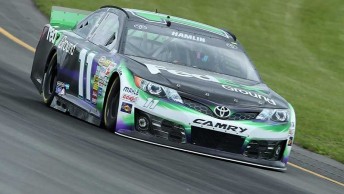 Hamlin will start from pole at Pocono

Denny Hamlin will start from pole position for the Pocono 400 after setting a track record to beat Kurt Busch to the fastest time.

It is Hamlin’s second pole of the season, third at Pocono and 19th of his career.

The Joe Gibbs Racing driver has won four times at the 2.5 mile track known as the ‘Tricky Triangle’.

“We really just made the car a lot better,” said Hamlin.

“That’s what you want to do, you want to play it just enough in the first few rounds and then in the final round you go all-out. It’s good to have a good Friday.

“It’s good to get a track record and have that No. 1 pit stall, that’ll pay dividends on Sunday, and I have the best pit crew on pit road. So hopefully, this lends itself to a great win on Sunday.”

Brad Keselowski’s strong run in qualifying this year continued with the third fastest time and he will share the second row with Kevin Harvick.

Behind them will be Jeff Gordon and Kyle Busch.

Jimmie Johnson, the defending race winner and the winner of the past two Sprint Cup races, did not advance to the final round of qualifying and will start 20th.

Among the notable drivers not to make it past the first round of qualifying were Matt Kenseth, Kasey Kahne and Australia’s Marcos Ambrose who will start from 29th.

“I knew early in the qualifying run we were tight,” said Ambrose.

“You can’t work on the chassis during the qualifying session so we had to do the best we could on a second run.  We were faster, but still tight.

“We will just now concentrate on our race trim and for Sunday’s race.  We will keep fighting.”

A red flag was displayed with nine minutes left in Round 1 of the three-round qualifying after Dave Blaney spun in Turn 1.

However Blaney is assured of a start in the race with 43 cars entered for the event.

Crews will get a further two practice sessions tomorrow before Sunday’s race.