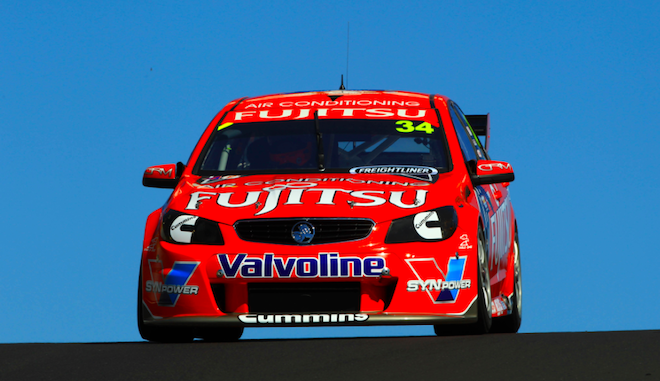 A project of Melbourne-based entrepreneur Tony Klein, Dragon made its first and so far only Dunlop Series start with its PWR-built, ex-Nandi Kiss Holden at Winton in April.

The team has already purchased an ex-GRM chassis to expand its Dunlop effort to two cars and, as previously reported, has also bought the two Car of the Future specification Holdens campaigned by Rogers’ team last year.

Aiming to eventually create a platform for training young drivers, engineers, mechanics and administrators through his team, Klein says that the current-generation cars have primarily been purchased in preparation for future Dunlop Series use.

Running a wildcard entry with one of the two Holdens at Bathurst, however, is an option that the ambitious businessman is keen to explore.

“We have not submitted an application but we are looking at the feasibility of it,” Klein told Speedcafe.com of a wildcard entry.

“The main issues for the team is whether we could establish the right team and the right drivers to support such a big event.”

Dragon currently has no full-time mechanical staff of its own, with GRM personnel playing a key role in recent refurbishing of the ex-PWR chassis and preparation of the ex-GRM Dunlop Commodore, which was campaigned last year by Minda Motorsport for Sam Walter.

The two COTF chassis meanwhile remain at GRM’s Dandenong, Melbourne, facility, where they are being prepared ahead of delivery to Dragon, whose workshop is located in nearby Mordialloc.

Rogers told Speedcafe.com that his team has the capacity to help Dragon with the preparation of a Bathurst entry, as well as supply additional staff to run the car at the event if needed.

“Tony wants me to give him an idea of how we could help him do it and what it would cost to get the cars ready,” Rogers told Speedcafe.com.

“We’ve got our full-time staff that run our cars, but in addition to those people there are others that have worked for us over the years and that we bring in to do odds and ends for other people.

“We could put it together for him with an experienced group of people and with help from equipment suppliers.

“We’re going to nut it together, but it’s up to him (to decide if it goes ahead). I can tell him what we can offer him and if he’s happy with that then I’m quite happy to do it.”

Rogers – who says any assistance would not clash with his squad’s factory Volvo status – and Klein are both adamant that the entry would be a competitive proposition.

The two cars currently have ex-Walkinshaw Racing engines that Rogers says have been “up-specced to comply with all the latest rules”.

“If we invest in this series (the V8 Supercars Championship) in 2014 we would not do it just to make up the numbers,” said Klein.

“There is no doubt that our COTF cars will be competitive as one of them finished in the top 10 last year.”

Former open-wheel aces Tim Macrow and Kristian Lindbom have been earmarked as the drivers should the entry come together.

Macrow steered the team’s ex-PWR Holden at Winton and will do so again in Townsville before switching to the GRM chassis for the following round at Ipswich, where Lindbom is scheduled to take over the older machine.

Both drivers cut laps in the PWR chassis, which uses a Kelly Racing engine, at a Winton test on Monday, where they were assisted by GRM co-drivers Greg Ritter and Alexandre Premat.

Macrow told Speedcafe.com that he’d relish the opportunity to partner Lindbom in a Bathurst wildcard.

The 32-year-old’s Bathurst experience is limited to a handful of laps in Formula Ford and Formula 3 machinery, while Lindbom raced at the circuit in the Dunlop Series last year.

“If we can go up there and both roll around consistently and stay on the lead lap, there’s no reason why we couldn’t get a result,” said the two-time Australian Drivers’ Champion.

“The cars are totally different to what I’ve been driving but towards the end of Monday it was starting to really click.

“It was the first proper test that we’d done and it was good having Greg there as well. He went through a few things that helped me get up to speed a little bit more.”

Having missed Perth while the team sorted issues with the car, Macrow is looking for a clean weekend in Towsville before moving towards the top 10 once in the newer GRM Holden at Ipswich.

“If we can go to Ipswich and be nudging the top 10 I’d be very happy. I think that’s a realistic goal,” he said.

“It’s going to be good having GRM’s help with all of Krusty’s (Richard Hollway, GRM engineer) information and knowledge.

“Gypsy (Jeff Marshall, GRM engine specialist) and all those guys know the cars back to front and towards the end of the previous-generation cars they were running very well.”

The team’s Holden will be entered under the Dragon Motor Racing banner from Townsville onwards after running as Gallagher Motorsport at Winton, where its operation was being led by Denis Gallagher.