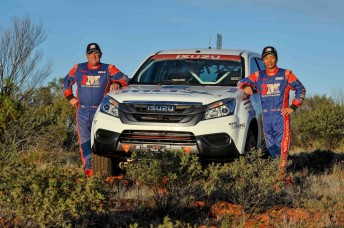 Offroad warrior Bruce Garland is expecting a strong showing from his all-new Isuzu MU-X in the Tatts Finke Desert Race at Alice Springs this weekend.

The Isuzu MU-X family-sized SUV will face its international offroad debut in Australia’s iconic desert event which dates back to the 1970’s.

“The car is awesome, really good straight out of the box,” Garland says.

“We’ve spent a couple of days testing on roads similar to what we’ll be facing with the Finke and it is really good to drive really fast on dirt.

“We cannot believe what a basic stock-standard car can do.

“It’s a lot better than we thought it would be, so obviously the Isuzu engineers have done a really good job on the chassis.

While the 2015 Dakar Rally is not confirmed the Finke will be an important part of those plans from a development point of view if they come to fruition.

The 39th annual Finke classic is a logical starting point for the Garland Motorsports campaign, given the Dakar-like punishment it will dish out.

This year’s run over the two-day, 460km race will be Garland’s 14th start in the event.

After a Prologue on June 7 to determine the starting order, competitors race through the desert and across one of the oldest rivers in the world (the Finke) before camping out overnight.

Any damage done on Day One (Sunday) must be fixed during the overnight stop before the field tackles the return run to Alice Springs on the holiday Monday.