Michael Dunlop has scored his third win of the 2014 Isle of Man TT and 10th overall for his career with a start to finish victory in the second Supersport race.

He joins legendary names Giacomo Agostini, Stanley Woods, Rob Fisher and Ian Lougher on 10 wins with a flueless ride on his own MD Racing Honda.

Dunlop gradually reeled in Bruce Anstey, who started ten seconds in front of him on the road, and the pair circulated together for the second half of the race, the gap at the end 10.089s as the Kiwi, in a display of sportsmanship, let Michael take the chequered flag first. William Dunlop took third on the Tyco Suzuki. 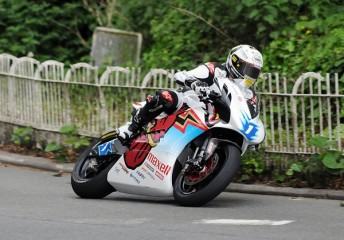 Australia’s Josh Brookes was fighting for a top-five finish when he crashed while battling with Lee Johnston. The pair were involved in an incident at Creg ny Baa, fortunately both escaped injury.

The results mean Michael Dunlop is now a clear leader in the Joey Dunlop TT Championship on 91 points followed by Anstey (69) and Harrison (54). Anstey needs to win Friday’s Senior to have any chance of overhauling Dunlop. Lintin’s second maximum haul of points has seen edge closer to the TT Privateer’s Championship as he’s moved on to a total of 81 points – only second placed Russ Mountford (64) can now overhaul him.

Earlier in the day legend John McGuinness took his 21st TT race win with victory in the TT Zero race for all-electric bikes.

Late rain forced the postponement of the second Sidecar race which will now be run tomorrow.