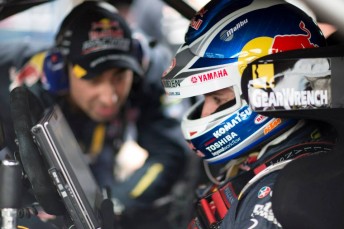 Red Bull Racing Australia and Erebus Motorsport are on track at Ipswich today as the Queensland teams have their turn to seek improvements ahead of Hidden Valley.

The day marks the first of three private test days of the year for the two teams and follows a 17-car hit-out of Victorian-based outfits at Winton on Monday.

The test has been billed as a particularly important one for Red Bull following a mixed start to the season from the three-time reigning teams’ and drivers’ champions.

Although Craig Lowndes and Jamie Whincup sit a competitive second and fourth in the points standings respectively after 16 races, the team has suffered uncharacteristic form swings and mechanical failures.

Red Bull technical director Ludo Lacroix, is attending the test despite recently suffering hand injuries in a horror accident involving a model aircraft, is hopeful of a fruitful day’s running at Ipswich.

“It’s an important day because we don’t get many (test days),” Lacroix told Speedcafe.com.

“I think we are not far away from unlocking a couple of things that will make us what we were before.

“But we need to prove to ourselves that we’ve understood fairly well our mistakes.

“It’s a very challenging championship and the competition has risen this year.”

Red Bull’s mixed results have come despite the team proving to have the most powerful engines in the championship during recent parity testing.

The straightline performance of the KRE-powered Holdens has been a key talking point in the paddock since Symmons Plains, where the Red Bull cars made the most of the long straights to dominate proceedings.

“A lot of people are talking about our big (powerful) engine, and we have a big engine, it’s true, but that doesn’t do everything when you’re in Winton or in Perth,” continued Lacroix.

“You’re speaking about something like five hundredths (of a second) a lap if you run the simulation in the computer with the big engine or the small engine (at the tighter circuits).

“What is important is less understeer, that’s for sure. Being able to accelerate the car out of the corner in the last 15 laps. That’s what makes the big difference in lap times.

“Ten horsepower more or 15 less, you’re speaking about at most a tenth because there is so little time that we’re flat-out with the power on.

“So what’s important is how fast you come out of the corner before you’re flat-out.

“It’s a very important test for us and we should unlock a couple of mysteries that we still have about the tyre.”

“I’ve never looked forward to going to a test day as much as this as it’s probably the biggest stint where I haven’t had a drive of a racing car since I started driving when I was 10,’’ said Alex, who teams up with Will for the first time after losing his full-time seat with Team Jeld-Wen at the end of 2013.

“It’ll be good to get back behind the wheel and have my first drive in the Mercedes.

“I’m not sure how many laps I’ll be getting but it’ll just be good to get comfortable in the car, I’ve made a seat so we’ll how well that works and get everything organised.’’

Erebus’ head of engineering, Wes McDougall, says the team will be focussed on evaluating set-ups throughout the day.

The test marks Erebus’ second visit to Queensland Raceway this year after it ran Jack Le Brocq under the ‘rookie day’ rules in February to evaluate a number of off-season updates.

“The test day gives us a great chance to evaluate and validate set-up based changes that previously have only been performed at race meetings,’’ said McDougall.

“The reduced Friday practice session this year have made development quite challenging, so we are keen to hit the track and further our performance before Hidden Valley.

“With teams having only four test days and the removal of co-driver specific sessions at race meetings, it will also be great for our co-drivers to receive some laps in the cars.’’