Erebus Motorsport is confident it has made valuable progress in tuning its Mercedes-AMG chassis despite losing track time following Alex Davison’s crash during today’s test at Queensland Raceway.

The Betty Klimenko-owned team spent the majority of its day working on chassis setups rather than testing new components in a bid to improve the Mercedes E63 AMG’s handling.

Drivers Lee Holdsworth and Will Davison were joined by co-drivers Craig Baird and Alex Davison at the Ipswich track for vital mileage ahead of the upcoming Pirtek Enduro Cup.

The #4 Holdsworth/Baird car ran untroubled throughout the day but the same could not be said for the #9 entry.

Will Davison lost nearly half an hour of running in the morning due to a power steering issue, before brother Alex suffered a heavy impact at Turn 3 as a result of a rear brake problem in the afternoon.

Despite only having once car complete the test day, the team believe they have made sizeable gains in terms of chassis set-up.

“We had a really successful day,” Holdsworth told Speedcafe.com.

“I think as far as the chassis goes we are pretty close (to the front-runners).

“For the #4 car it was really positive obviously the #9 car had their issues which was a shame. Having two cars testing is always better than one.

“We didn’t throw any new components at the car it was more about just learning the car.

“It was hard to tune the chassis last year as there was so many other things we had to work on.

“I think we are getting our head around this car now and we have learnt a few things today.

“Every round I’m optimistic at the moment, (but) I’m not going to races thinking we are going to win as there are still a few more things to come and bolt in under the hood.

“The extra things coming in down the track will get us right there.”

Erebus team manager David Stuart confirmed that the squad had worked through a number of set-ups before the #9 car was ruled out out for the majority of the afternoon running.

“We have been conservative at race meetings so we have expanded upon that.

“Both co-drivers have had a run and their lap times and feedback has been good.”

Stuart hinted that the team’s long-awaited engine upgrade package will most likely be completed and homologated in time to debut at the Castrol Townsville 500 next month.

“We were hoping to bring on earlier but when you are talking about engine components and upgrades there is a lot of work in that and we just need to make sure we get it right,” he said.

“Townsville could be the target.”

The upcoming Skycity Triple Crown at Hidden Valley will be Stuart’s last with the team before he takes up the role of sporting and technical director at V8 Supercars on July 1. 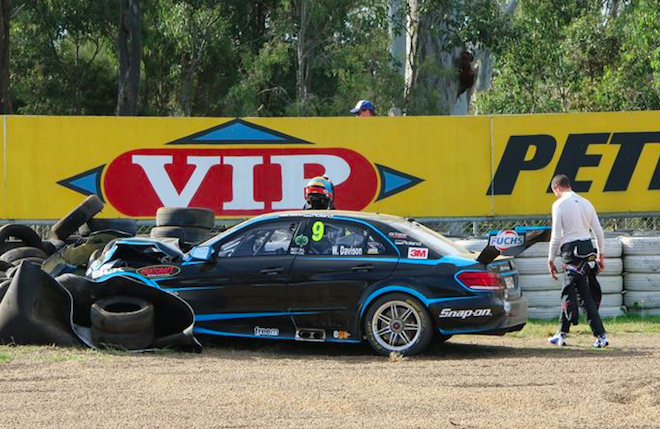 Alex Davison walks away from the #9 Erebus Mercedes after its incident. pic: Matthew Paul Photography