Grove will commandeer a FACH Auto Tech entry in the combined French/English Carrera Cup exhibition race on the undercard to the 24 Hour classic on June 14.

Fellow Australian Carrera Cup runner Marc Cini is also contesting the 45-minute race which will include a bumper field of 62 designed to celebrate Porsche’s return to top competition at the Le Mans 24 Hour for the first time since 1998.

Victorian Tony Bates had been working on a deal to also join the field but will not make the trip after suffering costly damage to his regular mount last time out at Phillip Island.

Grove’s invite sprang from his effort with Earl Bamber and Ben Barker when the trio won Class B at the Bathurst 12 Hour after finishing eighth outright a Porsche 997 GT3 Cup car.

Bamber is currently combining the German Carrera Cup, defending his crown in the Asian Carrera Cup while also running for the FACH team in the Porsche Supercup where he currently sits fourth in standings and is leading the rookie charge.

“There were eight spots for the rest of the world to make up the 62 car grid and I got invited through France’s Carrera Cup which came about after the success we had at the Bathurst 12 Hour,” Grove told Speedcafe.com 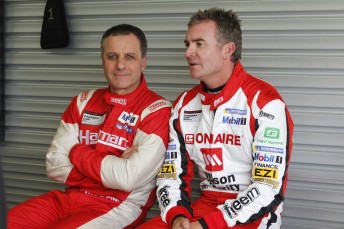 “While I really enjoy Carrera Cup Australia I love doing the enduro formats.

“Earl and I will probably team up and do Sepang (12 hour in August) together and maybe some other races like the Highlands 101 in New Zealand and then back to Bathurst next year for the 12 Hour.

“And for me to do some 24 Hour racing in the future at least this will give us some experience at the Le Mans circuit.”

“I’ve been on the simulator trying to get up to speed and there is a lot of long straights which gives you an opportunity to have a look at your data etc,” he said.

“We’ll hit the rev limiter within a couple of hundred metres of those long straights.

“We have a one hour practice on Wednesday (June 11), followed by a one hour qualifying the next day and then the race on Saturday.”

“Initially there was only supposed to be one from each country invited but they’ve now allowed two so I’m representing Australia per se although my invitation came through France.”

Grove said he has drawn plenty of experience from his association with Bamber and more recently Scott McLaughlin when they combined to win the mini endurance Carrera Cup round at Phillip Island.

“To drive with guys like Earl and Scotty McLaughlin the amount of things I’ve learnt is very valuable. Both of those guys are at the top of their game.

“I like driving with these guys because they are hungry and are really good at it.”