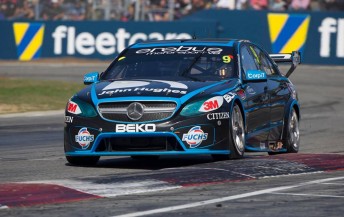 Erebus has promoted internally to replace its team manager

Existing Erebus Motorsport staffers Wes McDougall and Ben Croke will assume the duties of team manager David Stuart when he departs the team later this month.

V8 Supercars confirmed this morning that Stuart has elected to take the newly created role of sporting and technical director for the championship.

Stuart’s exit comes amid the team’s struggle to remain financially afloat as it continues to operate without primary sponsors.

McDougall and Croke currently hold down the roles of Head of Performance – Engineering and Crew Chief at Erebus respectively.

The pair, who have both been regular fixtures at the formerly Stone Brothers Racing outfit over the last decade, will continue to work alongside Ross Stone, who remains the squad’s general manager.

Erebus CEO Ryan Maddison paid tribute to Stuart’s efforts with the team, which included playing a key part in its transition from Ford to Mercedes-AMG equipment for 2013.

“David was a key part of the transition from SBR into who Erebus is today and what our future looks like,’’ said Maddison.

“It’s under David and Ross’ watch that we have made the transition to achieving front-running results and a race win.

“We do have a team of successful and skilled staff and it’s a compliment to David and the rest of the team that he has been chosen for such a key role.

“Our focus from day one has been to set ourselves up with structure and planning, and we are confident that Wes and Ben have the experience and skills necessary to assume even greater responsibility than they already have.

“Whilst it’s our loss, it’s pleasing to know that V8 Supercars are putting on the best of the best on behalf of the category and we fully support David’s decision to move on.’’

McDougall joined SBR in 2005 after stints at Borland Racing Developments in Melbourne and Lister Sportscars in England.

He was promoted to his current position within Erebus late last year, having been the race engineer on the team’s now discontinued third car.

“It’s been great working so closely with David since the beginning of 2008 at SBR (when Stuart joined),’’ said McDougall.

“David has been a key player in the transition from SBR to Erebus over the last 18 months.

“Whilst we’re sad to see him go, it offers an exciting opportunity for myself and hopefully we can continue the momentum and move Erebus further up the grid.

“I’m looking forward to working alongside Ben and extending on the relationship that we already have.’’

Croke, who has been at SBR since its double-title success with Marcos Ambrose in 2003-04, echoed McDougall’s thoughts.

“Having worked with David closely for the last few years it’ll be very sad to see him go but by the same token it’s a great opportunity for me to step-up,’’ he said.

“It’s something that you aspire to, so to be able to take the next step in a team of this stature and at this level feels like quite an achievement given there’s a lot to do in continuing Dave’s great work.

“I’m looking forward to working with Wes, his strength lies with the technical side of things and from my point of view it’s the operational side of things so I think we’ll make a great team.’’