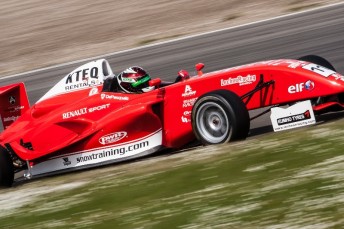 After dominating the opening meeting at Zandvoort, the Aussie continued his impressive start to the season by producing two faultless drives at the famous Belgian circuit.

The Lechner Racing driver, who started both races from second on the grid, followed Dutchman Janneau Esmeijer home on both occasions.

“Well done to Janneau, he is quick here and I had to work really hard for that one, so yeah, was a little frustrating, as close as I was I just couldn’t latch on, get a tow and try a pass,” said De Pasquale.

“But still its great to get on the podium at this iconic circuit.”

The championship reconvenes at Germany’s Nurburgring on July 11-13.

Marco Wittmann cruised to his second victory of the DTM season with a commanding drive at the Hungaroring. The BMW driver made the most of his pole position as he opened up a 40 second lead on the option tyre before his first stop.

After holding a healthy advantage, the German went on to take the chequered flag by 6.6 seconds from Audi’s Miguel Molina.

Bruno Spengler claimed the final spot on the podium for BMW after charging through the field from 12th position in the second half of the race.

Edoardo Mortara came through a race-long battle with former F1 driver Timo Glock to finish fourth. An incident between Glock and Nico Muller saw the German fall down the order surrendering fifth position to Adrien Tambay.

Wittmann leads the standings ahead of the series’ visit to the Norisring on June 29.

Lotus F1 protege Esteban Ocon opened up an 82 point lead in the FIA European F3 Championship after taking two victories from the three races at the Hungaroring. 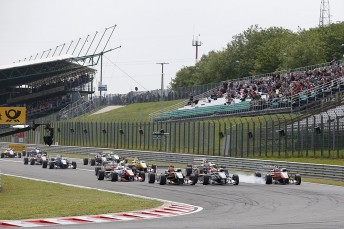 Ocon snatches the lead into turn one.

Despite a sprinkling of rain in race three, Ocon held on to complete a comfortable victory.

Meanwhile, Tom Blomqvist took the win in the first race after fending off Ocon. Felix Rosenqvist secured the final spot on the podium.

Australia’s Mitch Gilbert picked up another two points after coming home ninth in race one. He finished in 11th and 23rd in Sunday’s races.

Fellow countryman Spike Goddard failed to score any points with a 16th place finish on Saturday his best result of the weekend.

The FIA European F3 Championship heads to Spa on June 20-22.

Carlos Sainz Jr completed an impressive double victory in the fourth round of the Formula Renault 3.5 Championship at Spa.

The Spaniard enjoyed a perfect weekend recording two pole positions which he converted into two race wins for the DAMS squad. Sainz Jr celebrates on the podium

Sainz Jr led home Pierre Gasly and Jazeman Jaafar to take the spoils in race one with a margin of 17 seconds.

In race two, problems in the pits for Oliver Rowland allowed Sainz Jr to cruise to the chequered flag. He finished ahead of Will Stevens.

New Zealand’s Richie Stanaway, who made his return to the category after a two-year absence, retired from race one after a first lap crash.

The Kiwi looked set for a podium finish in race two but a 20 second penalty for a pit stop infringement dropped him from third to eighth.

Ricky and Jordan Taylor just held onto victory in the United SportsCar race at Detroit’s Belle Isle after a frantic finish.

The Taylor Corvette Daytona Prototype had built up a healthy lead before being reeled in by the Spirit of Daytona Corvette of Richard Westbrook and Michael Valiante.

In the end, the Taylor car took the chequered flag by just two tenths. Gustavo Yacaman and Olivier Pla came home in third for OAK Racing. Mok Weng Sun on his way to victory

Keita Sawa and Mok Weng Sun took the spoils in race one in their Clearwater Ferrari 458, while Hiroshi Hamaguchi and Rob Bell guided the team’s McLaren home to victory in race two.

“Richie got squeezed down at the start which bent a couple of wheels, bent the front toe-link, and bent the rear toe-link, so he struggled through the start,” recounted Baird after race two.

“Then I jumped in and there was nothing really to fight with. We pushed on with fairly new tyres in the beginning, but the car was very marginal.

“We were too far behind the car in front, and the car behind was way back so we just settled into a rhythm and stayed off the kerbs and just tried to get to the finish.”

Watch highlights from the DTM at Hungaroring

Watch Race 1 of the FIA European F3 Championship at Hungary