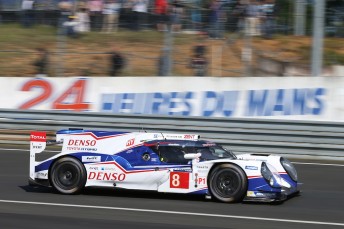 The Audi of Marco Bonanomi was second overall with a 3:23.799s lap set in the morning session.

Buemi, who shares the #8 with Anthony Davidson and Nicholas Lapierre, said: “We did a good job and completed a lot of kilometres which was the target, so I’m really happy.

“The car felt good and we tested everything we wanted to test.

“We saw some useful indications about which direction to go with set-up. Now we just need to analyse everything because there is still a lot we can learn.

“We will try to get the most out of our package so we are in the best possible position when we go into the race weekend.”

The #7 TS040 of Alexander Wurz, Stephane Sarrazin and Kazuki Nakajima was third fastest on combined times in 3:24.015s.

The #20 Porsche of Timo Bernhard, Mark Webber and Brendon Hartley was seventh overall just under two seconds off the leading Toyota.

Cars will again be on track at the La Sarthe circuit on June 11 for practice and qualifying ahead of final qualifying on June 12 before the race on June 14-15.