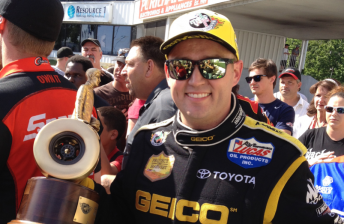 The result comes in just the ninth event of Crampton’s career after making the move from mechanic to driver in Morgan Lucas’ team.

Crampton is the 100th driver to win an NHRA Top Fuel event and just the second ever Australian, joining David Grubnic on the honour role.

“I’m absolutely over the moon with this win,” he said. “I already know I’m the luckiest guy in the pit and now we’ve proven it.

“This is beyond anything I could have ever imagined to go from a crew guy to standing here with a Wally (trophy) in just a few months’ time.

“I’m so humbled that GEICO, Lucas Oil, and Toyota showed faith in me and gave me this awesome opportunity. I’m really quite stunned at the moment.”

Crampton qualified second in the 16 car field but almost had his run come to naught with a flat right-front tyre in the opening round of eliminations.

“I’d never had that happen, so I didn’t know whether to give up or just go for it,” he said, having noticed the tyre was flat following his pre-run burnout.

“I decided to just go and it was surprising how well the car steered considering the rubber was shredding the entire way down the track.”