Michael Dunlop opened the 2014 Isle of Man TT with victory in the 6-lap Superbike race in record-breaking style.

The BMW Motorrad rider took control from early race leader James Hillier on the opening lap and aided by two laps inside the old outright lap record, he surged clear and was able to control the race in the closing stages to finish 20.5s ahead of Guy Martin (Tyco Suzuki) with Conor Cummins (Honda Racing) in third.

It was Michael Dunlop’s eighth race win at the Isle of Man TT and the first for BMW in the big bike category at the event in 75 years.

“I went flat out from the start and then nursed her home in the later stages – I knew I had a good lead over Guy,” said Dunlop.

“I’m over the moon for everyone involved with the team.”

Bruce Anstey who was outside the top ten on the opening lap after overshooting at the Nook, tore round the Mountain Course to become the first man ever to lap at more than 132mph with a final lap of 132.298mph.

The 20-time TT race winner John McGuiness finished in seventh after coming into the race week with a broken bone in his wrist injury. He was unable to run the pace for six entire laps as the leaders pushed forward. 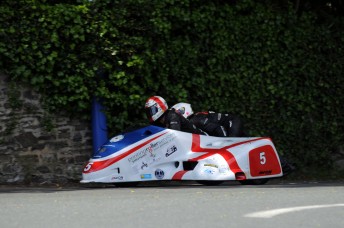 After six previous podium positions and over 20 years since his debut, Conrad Harrison, partnered by Mike Aylott, took his maiden Isle of Man TT victory in the opening three-lap Sidecar race after coming through from fourth on the opening lap.

Racing at the Isle of Man now has a day off before the first Supersport race and the Superstock event, both over four laps.