Marquez marches on to Mugello pole

Marquez marches on to Mugello pole 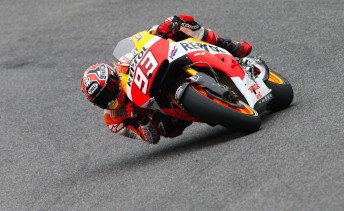 Marc Marquez‘s domination of the MotoGP season continued as he secured his sixth consecutive pole position for Sunday’s Italian Grand Prix at Mugello.

The Honda rider wasted little time in the session as he set his personal best of 1.47.270s in the early stages of the hit out.

Pramac Ducati’s Andrea Iannone emerged as Marquez’s nearest rival with the Italian making the most of the soft tyres only available to non factory teams to claim second spot.

Iannone trailed the championship leader by just 0.180s, while Yamaha’s Jorge Lorenzo was less than a tenth adrift in third.

Dani Pedrosa, who had topped the times in practice, was fourth fastest ahead of Monster Yamaha’s Pol Espargaro.

Ducati’s Cal Crutchlow showed signs that he is almost back to his best by securing sixth spot. He will line up alongside fellow countryman Bradley Smith and team-mate Andrea Dovizioso.

Stefan Bradl was ninth while Valentino Rossi, who is gearing up for his 300th MotoGP start, completed the top 10 for Yamaha.

Meanwhile, Aspar’s Nicky Hayden will take no further part in the Italian Grand Prix after aggravating an existing wrist injury.

The American had been suffering with the problem since round four in Spain but increasing pain has forced him to sit out the remainder of the weekend.

Hayden is expected to undergo exploratory surgery on the injured wrist on Tuesday.

“My wrist isn’t getting any better so as hard a decision as it is to take the best thing for me is to listen to the doctors and skip this race,” said Hayden.

“Mugello is a fast and physical circuit at the best of times but with the pain and loss of strength in my right hand it was getting really difficult to brake properly and it was risky to continue.”

In Moto3, Australia’s Jack Miller will start the Italian Grand Prix from second on the grid after being pipped to pole position by Alex Rins.

The Queenslander, who leads the championship standings by 30 points, trailed the Spaniard by just 0.25 seconds.