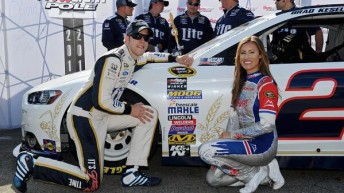 Brad Keslowski has claimed his second pole award of the year

Brad Keselowski’s fondness for the 2014 NASCAR Sprint Cup qualifying format has continued with pole position for the FedEx 400 at Dover.

With the exception of the Daytona 500, which uses a combination of one-lap qualifying runs and twin 150-mile races to set the starting grid, the Penske Ford driver has scored eight front row starts and now two pole positions from 12 races.

“They gave me a great car here with the Miller Lite Ford Fusion,” said Keselowski.

“I like this group qualifying and I got another shot at it. I think we have been pretty decent and there are a lot of great cars in race trim.

“The 18 (Kyle Busch) looked good and the 4 (Kevin Harvick) has been strong and we have a lot to go. There is a lot left in the weekend. We have practice tomorrow and we just have to keep working.”

“I thought we were going to have a better starting position for Sunday,” said Ambrose.

“Practice wasn’t as good as we expected, but our qualifying trim wasn’t too far off. We had a strategy to wait for the cloud cover, but the track was still slick and the car was tight getting back to the gas. Even after our adjustments through the first round, I gave it everything I had, and we couldn’t get the car good enough to advance to the second round.

“We have some work to do, but I’m confident we’ll move to the front on Sunday.”

All teams will have another practice before the race.