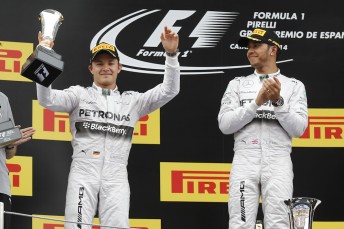 Lewis Hamilton has held clear-the-air talks with his Mercedes team-mate Nico Rosberg following their public falling out at the Monaco Grand Prix.

The relationship between the two Mercedes team-mates boiled over at last week’s race resulting in Hamilton refusing to congratulate the Monaco Grand Prix winner Rosberg on the podium.

Hamilton’s actions were triggered by Rosberg’s controversial qualifying incident when the German drove up an escape road at Mirabeau corner in the dying moments, which brought out the yellow flags.

The Brit felt this was a deliberate act to sabotage his final chance to secure pole position.

The breakdown of communications is believed to have begun at the Spanish Grand Prix when Hamilton went against team orders and used a more powerful engine mode in the final laps of the race to hold off his hard charging team-mate.

Hamilton, who lost the championship lead to his team-mate at Monaco, told media in the post race press conference that he and Nico are no longer friends and he had no plans to sit down and talk with his team-mate to air their differences.

However, the 2008 F1 world champion revealed yesterday via social media website Twitter that the pair have communicated and resolved their grievances.

“We’ve been friends a long time, and as friends we have our ups and downs,” tweeted Hamilton.