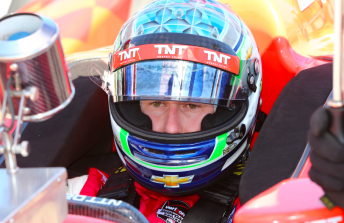 Australian IndyCar stars Will Power and Ryan Briscoe are looking to bounce back from their troubled Indianapolis 500 campaigns as the series returns to street course racing this weekend.

Detroit’s challenging Belle Isle circuit hosts the first of three double-header weekends for the season, with 260km races held on both Saturday and Sunday.

The event comes just a week after the Indy 500, which saw Power and Briscoe collide in the closing laps, costing the latter a top 10 finish.

Briscoe sits 11th in points after a mixed run during the first five races of the season, but says he’s confident that his Ganassi-Chevrolet package can be at the front of the field this weekend.

“I think it’s a good thing that we’re going right into the Chevrolet Indy Dual in Detroit, so we have a chance to get refocused and not dwell on the past,” said Briscoe.

“The team’s performance at the 500 shows what a great car and I truly believe that we can be a solid contender in any race.”

Compatriot Power meanwhile struck trouble during practice, striking the wall with the left-rear of his Dallara-Chevrolet.

Despite the drama, Power ended the day with the fourth fastest time behind only Pagenaud, Mike Conway and Helio Castroneves.

Power is looking to score his second win of the 2014 campaign to date this weekend, having triumphed at the opening round in St Petersburg.

The Australian finished eighth in the 500 after fighting back from a costly mid-race speeding penalty – an error also committed by his Team Penske Juan Pablo Montoya.

Adding to the pressure for the Penske operation this weekend is the fact that owner Roger Penske is also the promoter of the Detroit race, having revived the event three years ago.

James Davison, the third Australian in the Indy 500 field, will also be in action this weekend, returning to his regular ride in the Tudor United SportsCar Series.