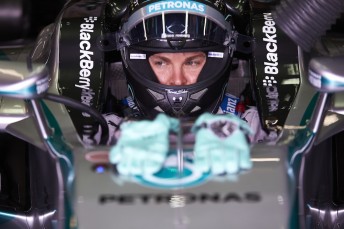 Nico Rosberg and Mercedes DTM star Pascal Wehrlein have been involved in a car accident during a promotional video shoot with Germany’s soccer World Cup squad which left two people in hospital.

The duo were driving in separate cars on a closed circuit in northern Italy with two members of the Germany’s national team alongside them, when Wehrlein’s vehicle hit two people who had walked out onto the circuit.

It is understood the injured were treated on the scene before being transported to a nearby hospital.

Rosberg, Wehrlein and their two soccer star passengers Julian Draxler and Benedikt Howedes were uninjured in the incident.

The Monaco Grand Prix winner said he had been shocked by the crash.

“I am shocked by the accident. My thoughts are with the two people who were injured and I wish them a fast recovery”, tweeted Rosberg.

Mercedes issued the following statement shortly after the accident.

“An accident occurred during a visit to the training camp of the German national football team”, read a statement from Mercedes.

“While driving on a closed circuit, DTM driver Pascal Wehrlein injured two people whom he unexpectedly encountered walking on the closed course.

“We cannot offer any statement concerning the severity of injuries, as both injured parties are currently undergoing medical treatment.

Pascal Wehrlein was uninjured in the accident.

“We deeply regret this accident and send wishes of quick recovery to the injured. “We will work in full co-operation with the authorities in determining the exact circumstances of the accident.”