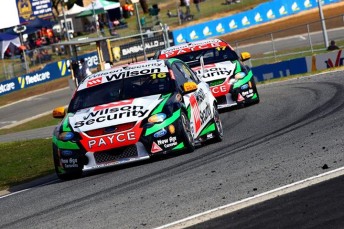 A third DJR Falcon could join the fleet at Bathurst

DJR continues to await Penske’s decision on whether the American giant will buy into the Queensland-based squad ahead of the 2015 season.

Speedcafe.com understands that Penske has however made recent enquiries about fielding a Bathurst wildcard through the team this year, which could get the green light regardless of future plans.

Such a move would provide Penske with the opportunity to promote his growing business interests in Australia and potentially feature Team Penske IndyCar personnel, whose compact season finishes in August.

Having already expressed interest in a wildcard slot with V8 Supercars, DJR has until the June 30 cut-off to formally submit its plans.

V8 Supercars is particularly keen to see wildcards added to the field this year as the championship’s current 25-car grid would be the lowest in the history of The Great Race.

DJR’s senior manager Ryan Story confirmed to Speedcafe.com that his team is working towards a wildcard, although denied any link between the Bathurst entry and Penske.

“It’s something that we really want to do and we’re working on it pretty hard at the moment,” he told Speedcafe.com of running a third Falcon under the DJR banner.

“It’s probably a fifty-fifty proposition for us, but if we can make the numbers stack up we’ll do it.

“It’s something that’s very, very high on our radar.”

Regardless of Penske involvement, the wildcard would utilise the chassis crashed by David Wall at Pukekohe last month, which is currently being repaired at DJR’s Queensland base.

“If an opportunity presents itself and we can put somebody like Andre (Heimgartner) in one of the seats, that would be really good for us, thinking bigger picture, longer term,” said Story.

“There are a couple of other young guys that you’d have to give some consideration to and more broadly it’s tricky because I don’t want to go down that path where we’re basically running just for the sake of running.”

Although Penske’s interest in buying DJR has been a hot topic since company president Tim Cindric visited last year’s Sydney 500, Story stresses that his squad is not counting on a deal taking place.

With DJR’s Ford agreement having been limited to assistance with original-equipment parts in recent seasons, attracting full backing from a manufacturer is said to be a priority.

“There’s one thing that would be great for us and that is some sort of defined manufacturer support running into the future,” said Story.

Penske’s own attempts to lure the Blue Oval’s global bosses into a long-term V8 Supercars commitment are understood to have been turned down earlier this year.