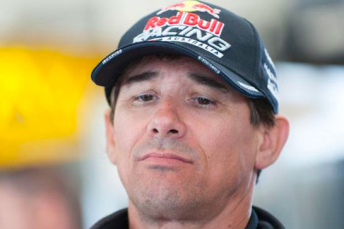 Triple Eight technical director Ludo Lacroix has returned to work after a gruesome incident with a model aircraft that left the Frenchman with permanent damage to his right-hand.

Lacroix had been working on a three-metre long, petrol-powered, remote control aircraft in the garage of his Brisbane home when the accident occurred.

An unexpected movement from the plane saw Lacroix instinctively stick his hand out to protect himself, resulting in contact with its spinning propellor.

“I’ve lost an index finger and part of the thumb,” a typically upbeat Lacroix told Speedcafe.com.

“We’ve got the middle (finger) which was nearly off, hanging on, and it was put together.

“We are hoping that this one will give me three fingers on that hand and a partial thumb, which will give me close to full capacity and full power.

The accident happened on the Monday evening following the Barbagallo V8 Supercars event, which Lacroix had attended in response to Triple Eight’s recently patchy form.

“I know that you shouldn’t do it (start the plane inside the garage), but you go away on a race weekend and lose time on things you want to do,” he said.

“The frame was attached to something, but the fact that it came towards me, my reaction was to put my hand forward and move backward, and it caught the hand.

“There is a reason there is a no-no and if you cross this line of no-no too much, one day you do get caught.

“I put my hand in the devil’s mouth many times and got away with no scar. This time it did grab it!”

Lacroix’s wife and young son were both home at the time of the incident.

“My son thought I was painting, there was so much blood everywhere,” he said.

Lacroix returned to his desk at Triple Eight on Friday as the team prepares for its first private test of the season next week.

The latest injury follows a motorcycle accident shortly after moving to Australia 10 years ago that resulted in a shattered foot which remains “very painful” to this day.

Lacroix has however vowed to continue his ‘action-man’ lifestyle away from race meetings.

“You lose bits and pieces in your life, but it’s not an intestine, it’s not a lung, so you move on,” he said

“I’ve enjoyed a lot in my life and am still going to enjoy a lot.

“It’s not going to change that much, I just have to adapt a little bit on my dirt bike and motorcross and things like that.

“But I don’t think I’ll switch the throttle to the other side or anything.

“If you stay in bed you don’t have injury, but if you do go out and challenge yourself you get more enjoyment.

“Every 10 years I get something off, but I’m happy with that,” he added.

“With the amount of things I do between sailing, diving, riding bikes, pushbikes, going downhill… I’m very happy if it’s only once every 10 years!”