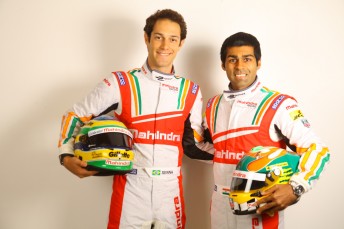 The pair join Virgin Racing’s Jaime Alguersuari and Sam Bird, and Audi Sport ABT’s recruits Lucas Di Grassi and Daniel Abt, as confirmed drivers for the new championship set to begin at Beijing in September.

Mahindra Racing’s announcement will reunite Senna and Chandhok, who were previously team-mates in GP2 at iSport and then in F1 with HRT in 2010.

Chandhok, who has been racing in sportscars since leaving F1, is already eagerly anticipating the opportunity to work with Senna.

“To be a part of the only Indian team in this series is a real honour for me,” said Chandhok.

“It’s also going to be a nice reunion for me with Bruno again. He’s one of my closest friends from the racing world; we respect each other and work well together which will be good for the development of the team.”

“There is a real ambition within the team to be leaders in Formula E from the start,” said Senna.

“There will be a lot to learn very quickly, both for the teams and drivers in terms of technology and driving styles and for race fans as Formula E will popularise a new type of motorsport across the world.”

The FIA Formula E Championship begins on the streets of Beijing on September 13.