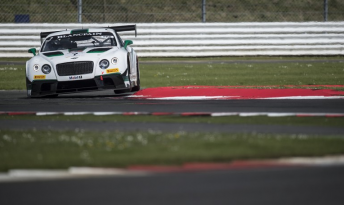 Bentley’s new Continental GT3 recorded its maiden victory in the second round of the Blancpain Endurance Series at Silverstone.

The M-Sport run machine driven by Steven Kane, Andy Meyrick and Guy Smith came back from a drive-through penalty received in the opening hour to beat the ART McLaren of Andy Soucek, Kevin Estre and Kevin Korjus.

Kane managed to clawed back a five second deficit in the final 30 minutes of the three hour race with the Bentley taking the lead just seven laps from the chequered flag.

Third place went to the WRT Audi of Marc Bsseng, Cesar Ramos and Laurens Vanthoor who were nearly half a minute behind the Bentley.

Jolyon Palmer extended his lead in the GP2 Series to 46 points after winning a chaotic feature race at Monaco from New Zealand’s Mitch Evans. 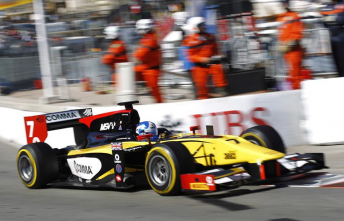 Jolyon Palmer on his way to Monaco win

Evans, who started from second, led for the opening 10 laps but as his super-soft tyres went off Palmer pounced leaving the Kiwi to battle for a podium finish.

A red flag and two Safety Car periods failed to disrupt Palmer as he fended off Evans and Felipe Nasr, who charged to third from 18th on the grid..

Monegasque driver Stephane Richelmi took victory in the sprint race as he led home Sergio Canamasas and Rio Haryanto. Evans came home in sixth just ahead of Palmer in seventh.

Nato had dominated both practice and qualifying before he converted his pole position into victory by just seven tenths of a second from Sorensen. Former British F3 driver Jazeman Jaafar was third a full 12 seconds adrift of the leading duo. Sorensen leapt in front of Jaafar at the start and remained glued to the gearbox of Nato for the entire race. Carlos Sainz Jr finished in fourth just ahead of Britain’s Oliver Rowland.

Kuba Giermaziak produced a faultless drive to secure his maiden win in the Porsche Supercup at Monaco.

The Pole controlled the race from start-to-finish despite coming under severe pressure from Philipp Eng. Michael Ammermuller took the final place on the podium in third, while Barcelona winner Earl Bamber finished ninth. 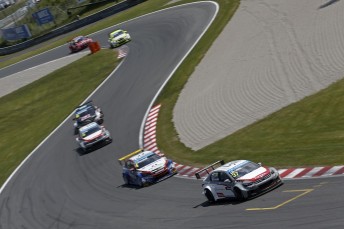 Muller became the first three time winner this season in race one when he completed a lights-to-flag victory from pole.

Dutchman Tom Coronel in the ROAL Chevrolet split the Citroens to finish in second with Jose Maria Lopez third. World Rally Championship legend Sebastien Loeb had held second early in the race but dropped to fourth at the flag.