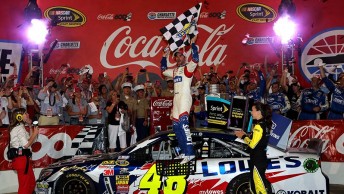 Johnson scores his first win of the year

Six-time NASCAR Sprint Cup Champion Jimmie Johnson has finally broken through for his first win of the season with victory in the sport’s longest race, the Coca-Cola 600 at Charlotte Motor Speedway.

The victory came in the 12th race of season and qualifies him for the Chase.

The result is his fourth win in the 600 and he did it by beating another championship contender who is yet to register a victory so far in 2014, Matt Kenseth.

“I promise you, all the hype and all the concern, that was elsewhere. We’ve had some bad races, I’m not going to lie, but tonight we had a great racecar.

“They know we’re awake. And winning, it doesn’t matter who you are. The 4 (Harvick) has been able to go out there and dominate, but now that we’ve got one, we’re right there.”

Like Jeff Gordon two weeks ago, the focus was on Johnson and whether he would be able to crack his winless run.

The weekend started off on the right note with pole before going on to lead a total of 165 of the 400 laps in the race.

Johnson carries momentum to Dover next week, another track where he has a strong record.

It looked like Edwards would win the race with 24 laps to go when he inherited the lead thanks to fuel strategy.

But Alex Bowman had a blown tyre two laps later, which ruined Edwards’ strategy and forced everyone to pit.

After finishing sixth at the Indianapolis 500 early in the afternoon, Kurt Busch arrived by helicopter and despite looking solid early, his race ended with a blown engine after 400 miles at Charlotte.

It was a tough race for Australia’s Marcos Ambrose who started ninth, but battled a loose handling car throughout the opening two green flag pit stops.

He not only lost the lead lap, one of his crew dropped a wheel into the fast-lane and he had to serve a drive-through penalty.

Falling as low as 41st, Ambrose battled throughout the rest of race to try and make up positions.

His night nearly ended when he spun and slid onto the infield grass before finishing in 29th place, four laps behind Johnson.