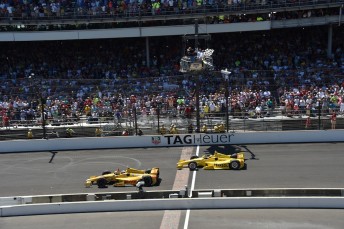 Ryan Hunter-Reay became the first American driver to win the Indianapolis 500 for eight years in a knife-edge finish.

A late flurry of yellow flags reduced the 200-lap race to a six-lap sprint to the finish with Hunter-Reay (Andretti Autosport) outlasting Team Penske’s Helio Castroneves.

Hunter-Reay charged from 19th at the start to win his country’s most revered open-wheel race, describing the feeling as big as the championship he won in 2012.

Andretti Autosport pair Marco Andretti and Carlos Munoz were third and fourth with Team Penske’s Juan Pablo Montoya fifth at his first start in the American classic since his victory in 2000.

“A dream has come true today and I’m a proud American boy that’s for sure,” the 32-year-old Hunter-Reay said.

“We didn’t practice those lines. Everything you saw at the end there was all new.”

Hunter-Reay swooped past Castroneves at the start of the final lap to win by .0600s, the second narrowest in Indy 500 history.

The Florida-based Hunter-Reay now takes the lead in the IndyCar championship, moving to 274, 40 clear of Will Power.

The race became a shootout following Townsend Bell’s heavy shunt with 10 laps remaining as officials red flagged the race to help see out a green finish. After the longest clean start since records for yellow flags began in 1976, Charlie Kimball brought out the first of four cautions with 50 laps remaining.

Kiwi Scott Dixon (Chip Ganassi Racing) was next to fall on lap 168 before the controversial third yellow which occurred on the restart, claiming polesitter Ed Carpenter and James Hinchcliffe.

Carpenter found himself squeezed in the middle as Bell moved on the outside with Hinchcliffe going for a gap on the inside going into turn 1.

Hinchcliffe stated as he was the last car on the scene he accepted a portion of the blame for the incident however Indiana local Carpenter wasn’t so diplomatic in his assessment.

Power (Team Penske) took over the running after the first round of pit stops, clearing out from Carpenter.

However Power’s race was compromised deeper into the run when he was issued a drive through penalty for speeding in pit lane during the fourth round of stops and eventually finished eighth.

Montoya, who had just come off a 33-lap stint, also copped a penalty for the same infringement.

Ryan Briscoe (Chip Ganassi) finished 18th after going a lap down early after slight contact with James Davison on the opening lap.

Driving the KV Racing entry, Davison covered himself in glory with a magnificent run to steer clear of trouble for the rest of the race and finish 16th, falling just short of his personal top 15 goal.

Kurt Busch supplied Andretti Autosport with its fourth car in the top 10 after finishing sixth and becoming the leading rookie before boarding a private jet for his Coca-Cola 600 duties at Charlotte.

See below for video of closing laps