Davison did a splendid job after going into the 200-lap race with the shortest program of all 33 runners and on a highly restricted budget in his Always Evolving #33 KV Racing entry.

The 27-year-old Australian dodged a bullet on the opening lap when he went perilously close to being taken out by compatriot Ryan Briscoe (Chip Ganassi Racing) before completing the race a gallant 16th.

He had run as high as 14th and feels cheated of an even stronger result after late race skirmishes also impeded his charge.

“My worst nightmare almost came true on the opening lap with Ryan Briscoe nearly losing it into me,” Davison explained to Speedcafe.com

“I had to take evasive action but we still made contact.

“To be honest I feel a bit bummed not to have finished 12th because I passed Simon Pagenaud and was running ahead of Alex Tagliani, Jacques Villeneuve and Sebastian Saavedra and I feel that’s where we deserved to finish today. 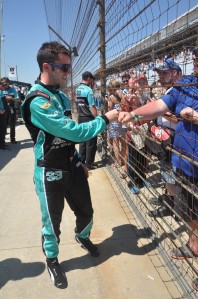 “When you’ve got the re-starts, anything can happen and you’ve got to be in the right place at the right time and it works for you during the race and against you but you don’t want it to go against you at the end.

Davison is fully aware that he achieved a top result, two places higher than the more experienced and former Indy 500 polesitter Briscoe after being thrown into the daunting 4km superspeedway on such a limited campaign.

“All in all I’m pleased with the competitive run I had and really proud of the Always Evolving KV Racing team for doing such a great job,” he said.

The race went green for 150 laps which enabled Davison to find a solid rhythm and make the right adjustments inside the cockpit and at the pit stops.

“I found myself picking off a couple of cars … Saavedra and Tagliani and a couple of others.

“By the end I was up to about 14th on the final restart (with six laps to go).

“I went into turn 1 and got checked up behind the whole field and then Villeneuve, Saavedra and Tagliani went by me and I ended up finishing 16th.

“We really punched above our weight with our budget and practice restricted program which was the shortest of anything.

“I’m glad to have made it to the end and have the car in one piece.”