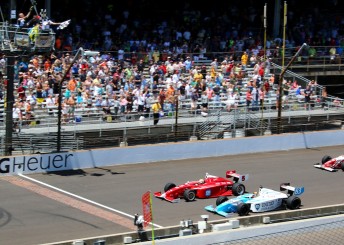 Matthew Brabham has fallen agonisingly short of pulling off an emotional victory in the Freedom 100 Indy Lights race at Indianapolis Motor Speedway.

In a week when he lost his famous grandfather Sir Jack Brabham, the 20-year-old fell just .005s short of clinching victory in the 40-lap race at the speedway where his pop had so much influence in the early 1960’s.

Brabham led 28 laps and held the advantage coming into the final corner however Gabby Chaves (Belardi Auto Racing) swooped with a late slingshot move to claim a nail-biting victory.

It was sweet victory for Chaves who finished second in the famous blanket finish in this race last year which featured four cars stretched across the line of bricks.

“I’m happy for (Gabby) Chaves, but it’s disappointing to lose the race by that much (0.005 seconds),” Brabham said.

“I thought I had it coming around the last lap when the two behind (Zach Veach, Gabby Chaves) were battling with each other and with me… I thought I just had it.

“I saw this white and red flash come around me on the outside, and he just beat me; I’m happy to get second.

“The team did a great job, and I think we had one of the best race cars out there; a big thank you to my United Fiber & Data/MAZDASPEED crew.

“I’m just disappointed not to have won.”

Chaves now leads the championship on 265, one point ahead of Veach with Brabham fifth on 234.

The race was marred by a serious crash when newcomer Chase Austin (Belardi) made a heavy impact with the tyres on the inside of turn 1 which put the race under caution on lap 15.

Austin was taken to Methodist Hospital and diagnosed with a fractured left wrist.