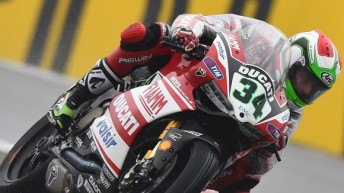 Davide Giugliano secured pole position for the fifth round of the World Superbike Championship after coming through a tricky wet qualifying session at Donington Park.

The Ducati rider pipped PATA Honda’s Leon Haslam to pole despite a fall in the closing stages at the British circuit. Treacherous wet conditions tested the field to the limit with several riders suffering falls.

However, it was Giugliano who came out on top with a personal best time of 1.44.903 seconds.

Haslam impressed on his home circuit with the Brit just a tenth shy of the Italian in second, while Aprilia’s Marco Melandri completed the front row in third.

In the end, Lowes was unable to match Giugliano, Haslam and Melandri in the final stages and had to settle for fourth.

Meanwhile, Rea will start from eighth on the grid after a crash at the Melbourne hairpin.

Sylvain Guntoli was fifth fastest for Aprilia ahead of the struggling Kawasakis of Loris Baz and current world champion Tom Sykes.

Bryan Staring will start from 27th on the grid after the Australian failed to post a time in qualifying on his debut for Grillini Kawasaki.