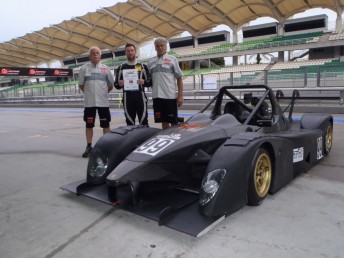 Liam Talbot has moved a step closer in achieving his goal to race in the Le Mans 24 Hours after securing a deal to join the Asian Le Mans Series.

The Australian sportscar racer, who only recently took up motorsport, will join the ATL Wolf Asia factory team for the five race endurance championship, behind the wheel of a CN prototype.

This is a significant step forward in the Queenslander’s long-term quest to compete in a LMP2 prototype at the world famous Le Mans 24 Hours endurance race.

Talbot will face arguably his toughest challenge of his career to date with the Asian Le Mans Series regularly attracting an array of world class teams and drivers.

“What a fantastic opportunity,” said Talbot, who is also preparing to race in the Nurburgring 24 Hours next month.

“We’ve been discussing our next step on the road to Le Mans for the past six months and with the launch of the new CN category it fits our aspirations perfectly.

“Teaming up with the ATL Wolf Asia factory team is also significant advantage to us. When we were presented the opportunity to test their new LMP2 prototype later in the year when it’s released, it was something I couldn’t pass up.

“I have been amazed by the sheer amount of down force the car generates, it’s quite significant compared to a Radical.

“The car is quick on old rubber and in the wet I’m braking near enough to my dry reference points. I’m excited and can’t wait to join this impressive team.”