SuperTourers: Business as usual amid wrangle

SuperTourers: Business as usual amid wrangle 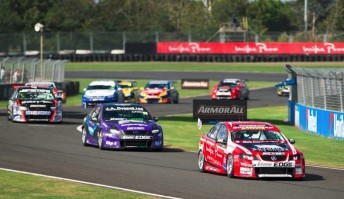 V8 SuperTourers chief executive Ray Noonan and MotorSport New Zealand have refuted claims the category has been banned from competing at the country’s circuits.

Noonan had initially relayed information to his teams, warning that the series would be blocked from all NZ tracks but later corrected the message, saying the V8 SuperTourer calendar would continue.

Initially Noonan wrote in part: “…that as a result of a decision made today at the MSNZ AGM, Shayne Harris, president of MSNZ, has advised me that V8ST have been banned from all NZ tracks, with immediate effect and indefinitely.”

However this was later found not to be the case.

V8 SuperTourers last month announced plans to move to a summer series for its 2015 calendar starting with the endurance races in September and finishing with the ANZAC Day meeting in late April on the V8 Supercars program at Pukekohe.

It is understood that the circuit owners recently held a meeting and brought their concerns to the governing body at its Annual General Meeting being held at Dunedin.

“The circuit owners had a meeting as part AGM and told MSNZ to get their act together with regard to sorting out something in regard to V8 categories and so forth,” Noonan told Speedcafe.com

“And this has been interpreted, well, (that) the SuperTourers can’t race any more until this is sorted out.

“I’ve spoken to the track owners this morning and everything is all good.

“A miscommunication occurred and it’s now been resolved and sorted out as far as I’m concerned.”

Noonan stressed that he and the chairman of the NZ V8 Touring Cars, Ian Booth, sat down and agreed to a joint calendar and to operate together in the future.

“We’ve formed a very constructive relationship with Ian to the point where we are sharing calendars, information and raceday officials.”

MotorSport New Zealand president Shayne Harris confirmed that no series had been blocked from running at any circuit.

“All the entities who own race circuits in NZ got together and said that this V8 split has go to stop,” Harris told Speedcafe.com

“What the circuit owners are saying is they have had enough of this fragmented V8 class.

“No-one has banned anyone.”

Noonan said that he is confident that the V8 SuperTourer calendar for 2014/15 will continue as planned.