LIVE: Race 12 of the Supercars Championship at the Merlin Darwin Triple Crown 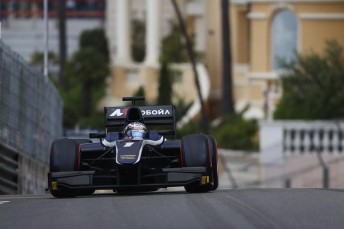 Mitch Evans scores first podium of the season at Monaco

Mitch Evans narrowly missed out on securing his maiden GP2 race win after being pipped to victory by Jolyon Palmer in a dramatic feature race at Monaco.

The New Zealander led for the opening 10 laps but as his super-soft tyres went off Palmer pounced leaving Evans to battle for a podium finish.

A red flag and two Safety Car periods failed to disrupt the 19-year-old as he fended off Felipe Nasr in the final laps to come home in second spot for his first podium of the season.

Evans out-sprinted polesitter Palmer at the start to lead as the field streamed into Ste Devote for the first time.

Aided by the super-soft tyres, the Russian Time driver managed to keep Palmer behind him until lap 11 when his worn tyres allowed the DAMS driver to slip through.

The race was brought to a halt on lap 12 when Evans‘ team-mate Artem Markelov became stranded at the Loews hairpin after being caught up in an incident involving Rene Binder and Andre Negrao.

Following a lengthy delay, Palmer retained the lead upon the restart with Evans, now on soft tyres, close behind in second.

Palmer was unable to pull away at the front as the Safety Car was deployed again on lap 25 when Julian Leal crashed at the Nouvelle chicane while trying to pass Raffaele Marciello.

All of the frontrunners took the opportunity to pit apart from Stoffel Vandoorne. However, once the ART driver finally made his last stop the battle for the race win went up a notch.

Race leader Palmer, now equipped with soft tyres, was unable to math his earlier pace which allowed Evans and Nasr, who started from 18th, to close in.

Despite piling on the pressure, Palmer held firm to take the chequered flag from Evans by just four tenths of a second with Nasr third.