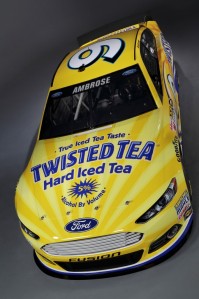 Marcos Ambrose will run with new primary backing for the showpiece Coca-Cola 600 at Charlotte this weekend.

Twisted Tea has become a new partner with Richard Petty Motorsports and will also run as the major backer at the Dover International Speedway race in September.

Ambrose said: “It’s great to see Twisted Tea increase their involvement with our race team, especially becoming a primary sponsor for such a big event.

“To have these guys increase their involvement on the car, both as a season-long associate and a two-race primary, is a big deal for us.

“ We’re trying to improve as an organisation and we can’t do it without their commitment.”

“We really want to give them a good run Sunday. This 600-mile race can be real twisted, with the track conditions changing as the race goes from day to night.

“The big challenge is adapting to the track which is real sensitive to temperature.

“Hopefully we’ll give everyone something to cheer for.”

Ambrose has enjoyed some solid results at Charlotte in 10 previous starts with three top 10s including a best finish of fifth in 2011.