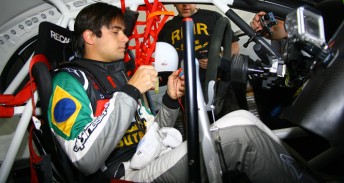 Former F1 driver Nelson Piquet Jr is the latest star name to join the second round of the FIA World Rallycross Championship at Lydden Hill this weekend.

The son of three-time F1 world champion Nelson Piquet, will take part in the one-make RX Lites Cup support category at the event held at the ‘home of rallycross’ in Great Britain.

Having spent the majority of his career in single seaters, the former Renault F1 driver and GP2 runner-up switched to rallycross this year competing in America’s Global Rallycross Championship for SH Racing.

“I’m very excited about the chance to race this weekend and I’d like to thank the team and sponsors that invited me to the UK,” said Piquet Jr.

“I’ve lived in the UK and won a championship there [British Formula Three Championship] but it’s been five years since my last race on British soil.

“This is a good opportunity to learn more about rallycross and get to know the European drivers. It will be my first RX Lites race and it will prepare me well for the X Games too.”

Piquet Jr’s invitation to race at Lydden Hill will be his first competitive outing on British soil since the 2006 GP2 round at Silverstone.

*Stay with Speedcafe.com for all the latest from the World Rallycross Championship