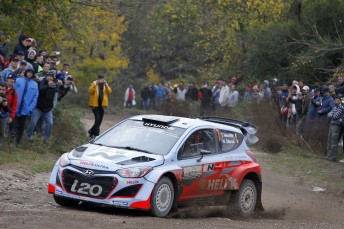 The German-based squad has hired experienced Italian Nino Frison who will lead the chassis, engine and design departments.

Until now, the technical side of the business has been handled by the Hyundai WRC squad’s  team principal Michel Nandan.

Development of the i20 WRC hatches has been slower than predicted with software and hardware changes to the engines not expected until the second half of the season.

Despite this the Hyundai’s have shown, at times, they can match the stage pace of the benchmark Volkswagen Polo Rs.

Neuville and Dani Sordo, who shares the drive in the second i20, won stages at the Portugal rally.

More chassis, suspension and differential development will be rolled out in time for the Poland round from June 26-29.

Frison’s inclusion is seen as a key development in Hyundai’s return to the WRC after a 10-year absence.

He has a wealth of experience in a 30-year career which has included F1 and various other categories.

Hyundai Motorsport has recently inaugurated a new dynamometer at the Alzenau headquarters to help speed up the development of its 1.6litre turbo-charged engine.

Meanwhile, the team has also announced that Neuville and Juho Hanninen will commentate for Eurosport at two rounds of the European Rally Championship.