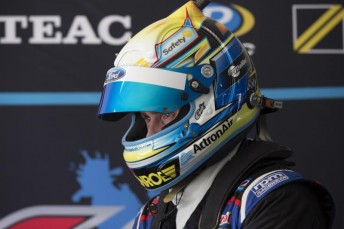 Mark Winterbottom will get behind the wheel of Ford Performance Racing’s Jeld-Wen and The Bottle-O Fords at its upcoming Winton test.

The plan, understood to have been instigated by the championship leader, comes as the team makes a concerted effort to boost the performance of its third and fourth entries.

A star of last year’s Dunlop Series and Pirtek Enduro Cup in Holden machinery, Perkins has recorded just a single top 10 finish across the first 16 races with FPR, sitting 21st in the standings.

Although Reynolds has fared far better to sit ninth on the championship table, The Bottle-O Ford has failed to capture the podium-scoring form it showed in the back-end of 2013.

FPR will have its first private test of the year at Winton on June 2, joining Nissan Motorsport, Walkinshaw Racing, Brad Jones Racing and Volvo Polestar Racing at the rural Victorian venue.

The day will see all four FPR’s endurance co-drivers – Steve Owen, Paul Morris, Dean Canto and Cameron Waters – have their first drives of 2014, while Waters will also steer his Dunlop Series entry.

“We’re all going to swap cars on the test day,” confirmed Winterbottom on his YouTube channel.

“He needs a confidence boost so he needs to just know that the car is the same. He needs to learn how to drive these cars.

“It’ll be a big test day for him but we need him up there. Four of us fighting up there will be better than three of us so we’re pushing pretty hard to get him comfortable.”

Winterbottom will meanwhile be focussed on evaluating a number of new development items set to be rolled out at the test.

Only two teams – Tekno Autosports and Lucas Dumbrell Motorsport – have completed a private test day so far this year due to the tight nature of the event scheduling.

FPR had endured a troubled outing at the compulsory Sydney Motorsport Park pre-season test in February, with its program hampered both by wet weather and a team error that saw the cars running with the wrong final drive ratio during the morning.

“We’ve got a lot to try and some new components on the car that are dead-set going to be gains,” said Winterbottom.

“We’re sort of craving this test day. Hopefully it goes as good as we think it’s going to go.”