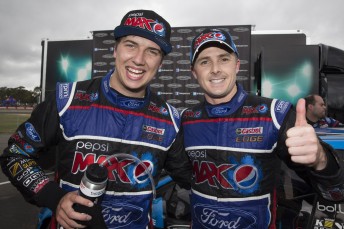 Castrol EDGE V8 Predictor ‘perrebros’ has taken round honours after the fifth V8 Supercars Championship event at the Perth 400 scoring themselves a $100 BP fuel card.

The perrebros team’s 125 points haul came with a prediction accuracy of 57% after they took full advantage of the new-to-2014 bonus points system and collected and additional 60 bonus points.

In the overall league standings team Murph  has taken top spot from Bloopy Enterprises who slipped back two spots to third. Arne’s Mob climed an impressive 25 spots and now occupies second in the overall standings.

The overall drivers’ points winner for the weekend went to Pepsi Max Crew FPR’s Chaz Mostert after his impressive debut win for the factory Ford outfit.

Red Bull Racing Australia’s Craig Lowndes was second for the weekend with Mark Winterbottom in third as the pair continue to occupy the top-two spots in the V8 Supercars Championship with Frosty ahead by 101 series points.

In the Experts’ league Speedcafe.com and Andy Priaulx shared round honours with 22 points each for the Barbagallo-based round.

Speedcafe.com maintains the lead in the Expert league standings with WTCC Champion Andy Priaulx moving ahead of Rust as the pair continue to trade blows for second spot on the Expert leaderboard.

Round 6 of the V8 Supercars Championship takes crews over to the west for the Skycity Triple Crown at Hidden Valley – June 20-22.