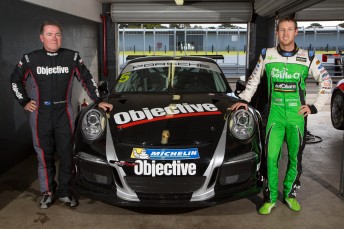 Tony Walls has David Reynolds in his team at Phillip Island

Ford Performance Racing’s David Reynolds is the sixth and final V8 Supercars Championship driver to be confirmed for this weekend’s Carrera Cup Pro-Am at Phillip Island.

The 28-year-old Reynolds spent two full seasons in the Carrera Cup before graduating to the V8 Supercars Development Series in 2008.

His stint in the one-make class included taking the championship in 2007, defeating the likes of Alex Davison and Craig Baird in the process.

“I’m really looking forward to returning to Carrera Cup with Tony Walls this weekend,” said Reynolds, who tested the car earlier this month.

“It has been seven years since leaving the category and I’ve followed it closely ever since.

“The new cars are unbelievably good. They are comfortable to drive and do everything that you would want a race car to do.

“It’s like using the PlayStation with the damage switch on!”

Additionally, five V8 Supercars co-drivers will be in the field, made up of full-time Carrera Cup competitors Craig Baird, Warren Luff and Steven Richards, and guest drivers Dean Fiore and David Russell.

The full 21-car entry will be released later this morning ahead of the weekend’s event, which marks Round 3 of the 2014 season.