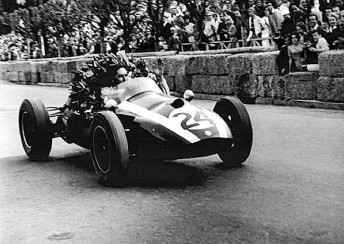 There are so many factors that made Jack Brabham an Australian sporting legend.

He blazed the trail for Australians in Formula 1, achieved the extraordinary feat of winning the world title in a car of his own design and began a family racing dynasty that now spans three generations.

In that context, it’s perhaps easy to overlook the fact that, at heart, Jack Brabham was as pure a racer as they come.

Honed on the dirt speedways of his native Sydney, Brabham’s combination of flamboyant car control and forceful race craft deservedly leaves the Australian rated among the all-time greats.

This week’s Pirtek Poll looks back at a selection of Brabham’s greatest drives.

With the traditional season-opening Argentine Grand Prix cancelled, the streets of Monte Carlo provided the first glimpse of the World Drivers’ Championship contenders for 1959.

It was fitting, then, that eventual champion Brabham came out on top, becoming the first Australian to taste GP success in the process.

The 100 laps of the principality proved as brutal as ever, with just six of the 16 starters taking the chequered flag.

While Brabham benefited from mechanical failures to early leaders Jean Behra (Ferrari) and Stirling Moss (Walker Cooper), searing footwell temperatures would make this one of the grittiest drives of Brabham’s career.

“As I inherited the lead I wondered how long I could keep going,” he recalled in his 2004 book, The Jack Brabham Story.

“My pedals were so hot I could barely touch them… but there was too much at stake to give in.”

Brabham withstood the torture to hold out Tony Brooks, who had himself been struggling with heat inside the cockpit of his new 246 Dino Ferrari.

It was, by contemporary reports, a popular victory. Brabham went on to record four more podiums – including a second win at the British Grand Prix in July – ahead of a dramatic title showdown at Sebring in December. Brabham pushed his car to the title at Sebring

For the first time since its inaugural season nine years earlier, 1959 saw the World Drivers’ Championship decided in a three-way finale.

Brabham, Moss and Brooks all headed to the inaugural US Grand Prix at Sebring in Florida with a realistic shot at the title.

In a repeat of Monaco, Moss again led early before a gearbox failure cruelled his charge, this time in the early going.

Brabham controlled the race from there, leading team-mate Bruce McLaren towards what appeared would be a comfortable victory.

Even a mid-race engine stutter, during which Brabham later recounted he had “nearly had a heart attack” as the car momentarily dropped onto three cylinders, failed to stop the Australian’s progress.

The last lap then provided perhaps the most dramatic moment of the world championship’s first decade, with Brabham’s Cooper stopping on the circuit, out of fuel some 400 yards short of the finish.

The twist caused widespread confusion, with McLaren first hesitating to pass his team-mate, before quickly dashing for the line ahead of the closing Maurice Trintignant (Walker Cooper).

“So surprised were the organisers and officials that there was no cheering, only a confused mumbling and it was some time afterwards before some people realised what had happened,” read a contemporary Motorsport magazine race report.

“In the meantime, Jack Brabham had started pushing his car towards the line, 400 yards with a very slight uphill gradient.”

By the time Brabham made the line, McLaren, Trintignant and Brooks had all swept through.

Fourth, however, was enough to ensure the Australian his first title by a mere four points over Brooks. 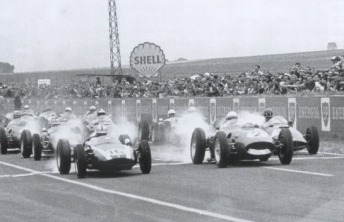 The highlight of Brabham’s successful title defence in Cooper’s new lowline chassis in 1960 was unarguably his victory in the French Grand Prix.

This victory came in the middle of five straight successes that saw Brabham a comfortable double-champion.

Brabham raced wheel-to-wheel with the American for much of the journey in a slipstream duel typical of high-speed venues during the era.

The Australian was eventually assured of victory when the Ferrari’s transmission cried enough.

“I always relished taking Ferrari’s trousers down,” smiled Brabham when recalling what he considered his greatest GP win.

It was the entry that would change the Indianapolis 500 forever.

Brabham, in a tiny, 2.7 litre Coventry Climax-propelled Cooper, lining up against 32 hulking front-engined roadsters that had dominated the ‘Greatest Spectacle in Racing’ since its inception.

Going by the numbers, a ninth-placed result was a very respectable achievement.

Brabham would long maintain, however, that he could have finished much higher, potentially even in victory lane, had his package included a tyre better suited to the speedway. 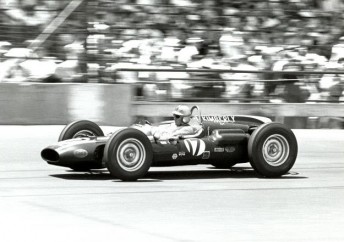 Brabham shook up the Indy 500 with the rear-engined Cooper in 1961. pic: sports illustrated

Brabham had driven the race conservatively hoping to get through on two stops.

“Dunlop didn’t have the experience at Indy and unfortunately we kept wearing the tyres out,” Brabham told Speedcafe.com last year.

“I was running third or fourth towards the end and unfortunately I had to come in for a tyre change which put me right back to ninth.

“It was purely a tyre problem. If we had the tyres I’m sure we would have been up there with them in spite of the small engine.”

Regardless, the audacity of the effort was truly the stuff of legend, and paved the way for the rear-engined Indy Cars that would dominate the future of the race.

“Unfortunately every time I go back there I get blamed for costing them a lot of money because they had to throw a lot of their equipment away,” he added. 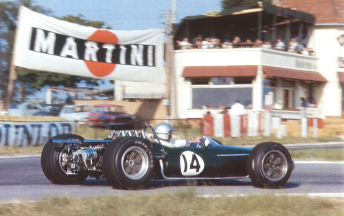 Brabham on the way to victory at Reims in 1966. pic: the jack brabham story

Much had changed for Brabham between his double-success with Cooper in 1959/1960 to the start of the 1966 season.

The move to a 1.5 litre engine formula for 1961 triggered a five-year winless streak for Brabham, who stuck with Cooper for 1961 before branching out with his own squad the following year.

Looking back on his career, Brabham would disagree with those who suggested his style simply didn’t suit the 1.5 litre cars; pointing instead to the underwhelming Coventry Climax engines.

Regardless, everything changed for 1966, where new 3.0 litre regulations led to a legendary title winning partnership with Australian engine supplier Repco.

The first win for Brabham in his own car came at Reims in July. Still significantly down on the power of the Mike Parkes and Lorenzo Bandini driven Ferrari V12s, Brabham got the better of the former in the early stages, before making the most of mechanical woes for Bandini.

Adding to the satisfaction, Bruce McLaren brought the Brabham team’s second car home in third. Brabham had also won the Formula 2 race in his Honda-powered entry the previous day.

“That was such a special weekend. It made all the toil, effort and disappointments seem worthwhile,” reflected Brabham. 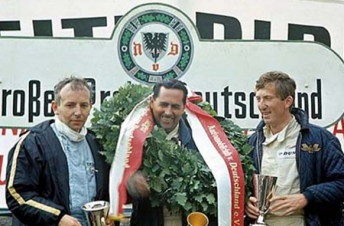 Brabham on the German GP podium with Surtees and Rindt. formula1.com

At the other end of Brabham’s four-straight wins that set up his 1966 title success was the German Grand Prix at the Nurburgring.

Brabham had a patchy record at the famed German venue throughout his career, but well and truly tamed what Jackie Stewart tagged ‘the green hell’ on this occasion.

The race was held in wet conditions, triggering Brabham to drive aggressively from the start in order to get himself out of the spray.

The contest soon distilled into a two-way battle between Brabham and John Surtees; eventually determined in the Australian’s favour when the latter’s Cooper-Maserati expired two laps from home.

In typical Brabham style, meticulous preparation had been critical. Extra hand-cuts in his Goodyear tyres had, he later claimed, made for a “more comfortable drive” than Surtees had endured on his Firestones.

With only the five best results from the nine races counting towards each driver’s score at the end of the season, the Nurburgring victory all-but wrapped up Brabham’s third crown. 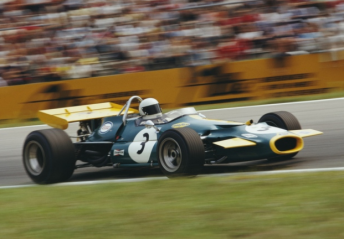 While Brabham’s results had swung heavily on the two engine formula changes during the 1960s, the rapid ramping up of aerodynamics as the new decade dawned failed to slow the Australian.

Brabham had planned to step down from driving for 1970, making way for Jochen Rindt.

The team owner would be behind the wheel after all for the season start, though, after the Austrian was released from his Brabham deal to accept a big-money offer from rivals Lotus.

So at nearly 44 years of age, Brabham lined up for what would be his final season.

Competitive throughout the year, Brabham long insisted that a fourth title should have been his, if not for some misfortune.

The race would leave an impression on Brabham, literally, having been struck by a rock during the battle for the lead with reigning champion Jackie Stewart.

“Jackie put a wheel off the road and hurled a stone which cracked me on the cheekbone,” wrote Brabham in his book.

“Some uncharitable types suggested he’d learned a thing or two from me!”

What was Jack Brabham’s greatest drive? Vote now on the poll below