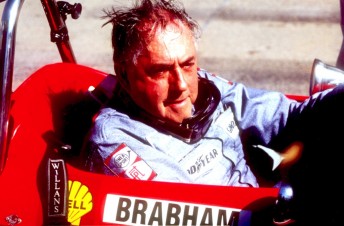 American former CART team owner and leading historic racing identity Bruce McCaw has recalled the time when Sir Jack Brabham spent his first stay in hospital as the result of a crash.

McCaw, the custodian of the former PacWest open wheel team, reflected on his association with Brabham following the Australian’s death aged 88.

The American telecommunications billionaire formed an association with Brabham after the triple world champion drove his McLaren BRM F1 in a ‘Formula Adelaide’ race for 1966-1969 Grand Prix era cars during the inaugural Adelaide 500 V8 Supercars meeting in 1999.

Later that year Sir Jack received an invitation to drive at the Goodwood Festival of Speed where he would return to drive regularly until 2004.

At the Goodwood meeting in 1999 Sir Jack had a heavy shunt in the M5A which briefly put him in hospital.

The M5A was campaigned by Bruce McLaren, Denny Hulme and Jo Bonnier during its grand prix competition years from 1967 to 1968.

“He was invited to Goodwood but said he would only go if he could drive my car,” McCaw told Speedcafe.com 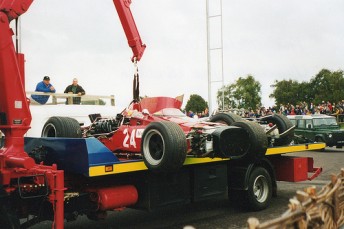 “Lord March was all over me about getting the car over there.

“So we thought if Jack wants to do it we will ship it over there.

“It did not turn out so good with wheel touching at 170mph (273km/h) and Jack ending up in hospital.

“I rang him in hospital and could not believe it when he told me that it was the first time he had been taken to hospital from a race.

“Incredible when you think of the era he raced in.

“Now it is up to his grandsons to carry on the name and they are doing a hell of a job.”

McCaw joined a chorus of praises for the legacy Brabham leaves behind for the global motor racing community.

“He will be such a great loss to the whole community,” McCaw said.

“But it must be said that he packed a hell of a lot in.”

Goodwood owner Lord March has also paid tribute to Brabham since his death.

“Sir Jack Brabham was one of the world’s greats and I remember very well him racing at Goodwood in the 1960s,” he said.

“He played a very important part in Goodwood’s history.

“More recently, he and Margaret regularly supported the Festival of Speed and Revival – it was wonderful to see him behind the wheel again driving many of the cars which he made so famous.”

See below video of Brabham’s huge shunt at Goodwood