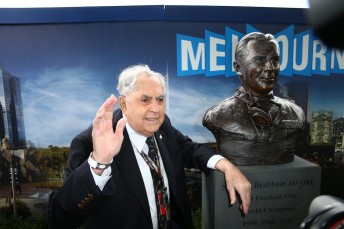 A triple F1 World Champion, Brabham was a goliath in motor racing and a beacon for everything that shaped Australia’s depth of global sporting talent.

Messages from a broad spectrum of motor racing people, dignitaries and politicians around the world continue to stream in.

Youngest son David Brabham, himself an accomplished racer who raced in F1 and won the celebrated Le Mans 24 Hour sports car race outright in 2009, said: “It’s a very sad day for all of us.

“My father passed away peacefully at home at the age of 88 this morning.

“He lived an incredible life, achieving more than anyone would ever dream of and he will continue to live on through the astounding legacy he leaves behind.”

See below for a collection of tributes for Sir Jack:

Alan Jones (1980 F1 world champion): Sir Jack is known the world over. He was one of the iconic Australians. He is not only the greatest driver this country has produced but is one of the world’s best.

Tim Schenken (ex-Brabham Formula 3 driver and former F1 driver) said: “I did F3 for them from 1969 to 1971 in a works assisted car. It’s a bit tough what can you say. He was a legend not just in motorsport but in sport in general he is right up there with the best of them.

“It is taking a bit to sink in I must admit. I was watching on Sky News and it’s brought a tear to my eyes.”

Daniel Ricciardo: “Legend! Sir Jack Brabham: 1926-2014. I would like to send my deepest condolences to the Brabham family and their friends.”

Dick Johnson: He’s the only guy that won a world championship in a car that he built himself and with an engine (Repco) that was developed here in Australia. They pioneered the whole system. He’s left a pretty good dynasty behind him with his sons and now his grandsons.

Matthew Brabham: “RIP Poppy. Will miss you very much. You were my inspiration. “Get after em”

James Courtney: “Feel honoured to have enjoyed Sir Jacks company & expertise many times in my career. He always had time & a good story. An inspirational man.”

Dario Franchitti: Rest in peace Jack Brabham, one of the giants of our sport. Condolences to @brabsracer @MattyBrabs and the whole Brabham family.

Erebus Motorsport V8: “Our thoughts are with the family of Australia’s Greatest Grand Prix driver Sir Jack Brabham who passed away this morning, aged 88.

Scott McLaughlin: “Very sad to hear about Sir Jack Brabham.. Thinking of the rest of the family at this time @brabsracer @MattyBrabs , Rest in Peace Sir Jack”

Craig Baird: “So sad to hear the passing of Sir Jack Brabham. Our thoughts are with his family. A true legend of our sport. RIP.”

Will Davison: “Will Davison: “An era has truly come to an end. Sir Jack was a legend in the true sense of the word who put Aus on the map. Privileged to have known him. My sincere condolences to all the Brabham family.”

Eric Bana: “Build them, race them, win them, we will never see another like the great Sir Jack Brabham.”

Rick Kelly: “Take a minute to remember Sir Jack Brabham. What a legend, he will be missed. An incredible human and driver in an incredible era of racing.”

Garth Tander:“Legend is a term often overused in our sport, but today our sport lost a true legend in Sir Jack Brabham. #ripblackjack”

John Bowe: “A very sad day for world motorsport today – Sir Jack Brabham peacefully passed away early this morning.
“What an amazing man he was; we will never see the likes of him again! I watched him in awe at Longford in Tasmania as a kid.
“Sir Jack Brabham put Australia on the motor racing map internationally and achieved things we mortals can only dream of.
“My condolences to his family and friends. A huge loss. Rest In Peace Sir Jack.”

James Warburton (V8 Supercars chief executive): “Many people in our Championship were inspired by Sir Jack and the incredible feats he achieved in conquering the world as a driver, engineer and team owner. Sir Jack led the way for many Australians to succeed on the global stage and for Australia to be recognised as a leader in motorsport. He will be forever loved, admired and remembered.”

Jason Bright: “Saddened to hear Sir Jack Brabham passed away. Such an inspiration to every Aussie racing driver.#sirjack”

Ford Performance Racing:”Our sincere condolences to the entire Brabham family. Sir Jack was a pioneer & paved the way for so many. A true legend#RIP”

Ron Dennis: (McLaren chairman and chief executive): “The word ‘legend’ is often used to describe successful sportsmen, but often it exaggerates their status. In the case of Sir Jack Brabham, however, it’s entirely justified.

Warren Luff:  “So sad to hear of the passing of Sir Jack, a truly remarkable man who contributed so much to our great sport. RIP.”

Alex Davison: “RIP Sir Jack. An Australian legend and one of my heroes. Thoughts are with the Brabham family.#RIPSirJack”

Johnny Herbert: “Really sad news with the passing of Sir Jack Brabham,A World Champion, and great man. RIP. My thoughts go to all his family.”

Will Power: “Sad to hear of the passing of Sir Jack Brabham. An absolute pioneer of motor racing. My condolences to the Brabham family.”

Michael Andretti:  “Very sad to hear about the passing of the great Sir Jack Brabham.”

Martin Brundle: “Very sad to learn that Sir Jack Brabham has died. One of the most respected pioneers of motorsport on many levels. Great driver, quality man.”

“With his pioneering spirit, Sir Jack Brabham personified many great Australian characteristics. “He was respected and admired for his spirit, and for his great skill as an engineer.”

Brands Hatch Race Circuit: “We’re sorry to hear of the passing of Sir Jack Brabham, winner of the 1966 British Grand Prix here. Our thoughts are with his family.”

Mitch Evans: “Saddened to wake up to the passing of Sir Jack Brabham. One of the most impressive pioneers and drivers motorsport has ever seen. #RIPJack”

Mark Webber: “I was saddened to hear the news of Jack’s passing today – he is the epitome of a champion racing driver and a true blue Aussie. He was a trailblazer; he took the hardest road and made it easier for the rest of us to follow. When I think of Jack, I think of a tenacious individual; an absolute grafter; he did it his own way and made it stick.”

Dan Gurney: “It is with great sadness that I received the news that my former Formula boss and team mate, the 3 time F 1 World Champion Sir Jack Brabham, passed away in Australia over the weekend. A motor racing giant has left our planet whose combined achievements of F 1 World Championship driver and car constructor in all likelihood will never be equaled. Dark haired “Black Jack” was a fierce competitor, an outstanding engineer, a tiger of a driver, an excellent politician and a hands-on creator and visionary, he opened the rear-engine door at Indianapolis and raced there, he was a doer, a true Aussie pioneer!”