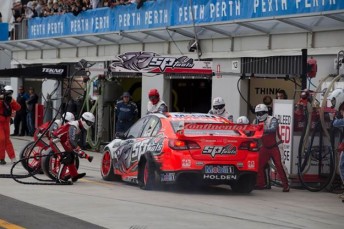 The Holden Racing Team and Erebus Motorsport will this week analyse the cause of tyre failures that took their cars out of contention in Sunday’s Race 16 at Barbagallo.

Both teams suffered left-rear failures across their two cars during Sunday’s 200km contest.

Erebus’ Lee Holdsworth was the first to strike trouble, forced to pit for a new left-rear after just 17 laps.

Running third at the time of his delay, Courtney eventually finished down in 15th ahead of Holdsworth (18th), Tander (22nd) and Davison (24th).

Dunlop’s motorsport operations manager Kevin Fitzsimons told Speedcafe.com post-race that low tyre pressures were the most likely cause of the issue.

“The problems were isolated to two teams and in both occasions the issues occurred within a couple of laps of one another,” he said.

“V8 Supercars and the teams know the minimum pressure that we recommend, but it is up to the teams whether they roll the dice in that area or not.”

Both teams, however, stressed that they must investigate the situation further once they return to their respective workshops this week.

Erebus Motorsport general manager Ross Stone confirmed to Speedcafe.com that his team raised its pressures for the remainder of the race following the failures.

Walkinshaw Racing managing director Adrian Burgess, however, says the the replacement tyre sets that saw Tander and Courtney complete 38 and 42 lap stints to the flag were running the same pressures as the ones that failed.

“We only had three laps from when one (Tander’s) went,” he told Speedcafe.com.

“We were thinking about it and discussing changing the pressures to go on his (Courtney’s) next set, but then he had the same problem. We didn’t have time to react.

“If you look at it one way you could think it was something chassis-wise, because we did it on both cars, or that it could have been from the kerbs,” he added.

“We weren’t the only team to do it, but there’s no excuse. We need to have a proper look at it back at the workshop to understand whether we were just too marginal or we were using the wrong line.

“We’re obviously gutted about what happened. James should have been on the podium and we let one go.”

Although Dunlop has expressed a desire to see its 18psi minimum starting tyre pressures become mandatory, the figure remains only a recommendation for teams.

Introducing the minimum figure into the regulations would likely require an official to be dedicated to each and every car during races which, although seen in the likes of NASCAR, is considered impracticable for V8 Supercars.

Burgess believes that the difficulty of enforcing such a rule means that pressure decisions should be left in the hands of the teams.

“If you’re going to put rules in place then it’s got to be enforceable and controllable,” he said.

“I think it should be something that’s left in team land. This sport is about pushing the boundaries.

“We don’t know yet whether we did or we didn’t (push the boundaries too far), but we’ll go home and do our analysis and find out where we’ve gone wrong.”

Courtney has dropped from fourth to fifth in the championship standings following Race 16, now 271 points behind leader Mark Winterbottom.